Scientists focus on bats for clues to prevent next pandemic 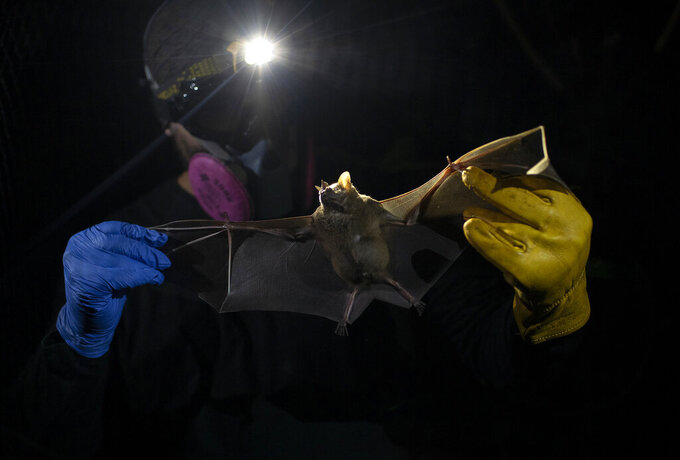 A researcher for Brazil's state-run Fiocruz Institute holds a bat captured in the Atlantic Forest, at Pedra Branca state park, near Rio de Janeiro, Tuesday, Nov. 17, 2020. Researchers at the institute collect and study viruses present in wild animals — including bats, which many scientists believe were linked to the outbreak of COVID-19. (AP Photo/Silvia Izquierdo)

RIO DE JANEIRO (AP) — Night began to fall in Rio de Janeiro’s Pedra Branca state park as four Brazilian scientists switched on their flashlights to traipse along a narrow trail of mud through dense rainforest. The researchers were on a mission: capture bats and help prevent the next global pandemic.

A few meters ahead, nearly invisible in the darkness, a bat made high-pitched squeaks as it strained its wings against the thin nylon net that had ensnared it. One of the researchers removed the bat, which used its pointed teeth to bite her gloved fingers.

The November nighttime outing was part of a project at Brazil’s state-run Fiocruz Institute to collect and study viruses present in wild animals — including bats, which many scientists believe were linked to the outbreak of COVID-19.

The goal now is to identify other viruses that may be highly contagious and lethal in humans, and to use that information to devise plans to stop them from ever infecting people — to forestall the next potential global disease outbreak before it gets started.

In a highly connected world, an outbreak in one place endangers the entire globe, just as the coronavirus did. And the Brazilian team is just one among many worldwide racing to minimize the risk of a second pandemic this century.

It’s no coincidence that many disease scientists are focusing attention on bats, the the world’s only flying mammals. Bats are thought to be the original or intermediary hosts for multiple viruses that have spawned recent epidemics, including SARS, MERS, Ebola, Nipah virus, Hendra virus and Marburg virus.

A 2019 study found that of viruses originating from the five most common mammalian sources — primates, rodents, carnivores, ungulates and bats — those from bats are the most virulent in humans.

Bats are a diverse group, with more than 1,400 species flitting across every continent except Antarctica. But what many have in common are adaptations that allow them to carry viruses that are deadly in humans and livestock while exhibiting minimal symptoms themselves — meaning they are able travel and shed those viruses, instead of being quickly hobbled.

“The secret is that bats have unusual immune systems, and that’s related to their ability to fly,” said Raina Plowright, an epidemiologist who studies bats at Montana State University.

Plowright and other bat scientists believe evolutionary tweaks that help bats recover from the stress of flying, when their metabolic rate rises sixteen-fold, also give them extra protection against pathogens.

Probing the secrets of bat immune systems may help scientists understand more about when bats do shed viruses, as well as providing hints for possible future medical treatment strategies, said Arinjay Banerjee, a virologist at McMaster University in Canada.

Increasing destruction and fragmentation of habitats worldwide — especially biodiverse areas like tropical forests — means “we are seeing higher rates of contact between wildlife and humans, creating more opportunities for spillover,” said Cara Brook, a disease ecologist at the University of California, Berkeley.

In India, a National Mission on Biodiversity and Human Well-Being has been pending since 2018 and will likely be launched next year. A core part of the plan is to set up 25 virus surveillance sites across the country.

A varied patchwork of virus surveillance programs exists in several other countries, but funding tends to wax and wane with the political climate and sense of urgency.

One approach that won’t help, scientists say, is treating bats as the enemy — vilifying them, throwing stones or trying to burn them out of caves. An attack along those lines took place this spring, when villagers in the Indian state of Rajasthan identified bat colonies in abandoned forts and palaces and killed hundreds with bats and sticks.

Scientists say such tactics are likely to backfire.

“Stress is a huge factor in upsetting the natural balance that bats have with their viruses — the more you stress bats, the more they shed viruses,” said Vikram Misra, a virologist at the University of Saskatchewan in Canada.

A better approach to minimize disease risk, Frank said, is simply to minimize contact between wild bats and people and livestock.

In Australia, widespread destruction of winter flowering eucalyptus trees that provide nectar for fruit bats — known locally as “flying foxes” — prompted the bats to move into areas closer to human settlements looking for alternate meals, including to a suburb of Brisbane called Hendra.

There, the bats transmitted a virus to horses, which in turn infected people. First identified in 1994 and named Hendra virus, it is highly lethal, killing 60% of people and 75% of horses infected.

To potentially reverse the movement of bats, Montana State University’s Plowright and colleagues based in Australia are studying restoring the bats’ original habitat.

“The idea is to plant new forests and make sure they are away from places with domestic animals and people,” she said.

Bats aren’t the problem, said Ricardo Moratelli, coordinator of the Fiocruz project in Brazil. “The problem is when human beings enter into contact with them,” he said.