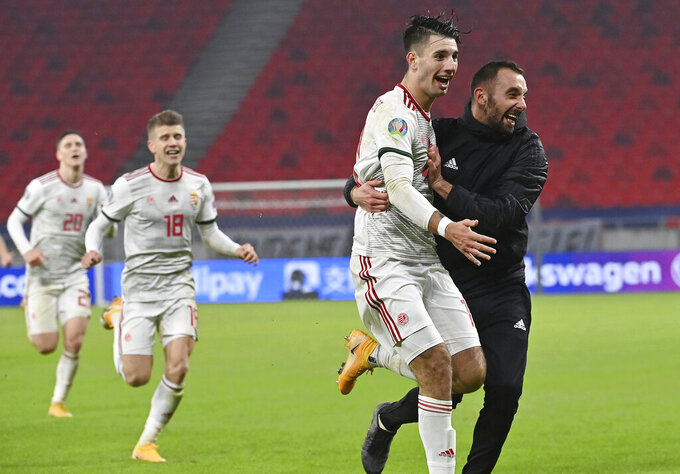 North Macedonia had a smoother ride through the European Championship playoffs Thursday in the earlier kickoff and will make its major tournament debut next year.

The 24-team lineup was completed for the pandemic-delayed Euro 2020 with four playoffs that served up plenty late-game drama in almost entirely empty stadiums.

All three later games passed the 87th minute with the away team leading 1-0 and home advantage counting for little in the COVID-19 era. All three were level three minutes later, though Hungary was the only home team that advanced in the end.

Scotland scored all five penalties in the shootout after a 1-1 draw against Serbia, before goalkeeper David Marshall saved the home team's final spot kick from Aleksandar Mitrovic.

Hungary trailed against Iceland from the 11th minute until leveling in the 88th, before Dominik Szoboszlai ran on and rifled a low shot to seal the stunning victory in stoppage time in Budapest.

Slovakia also took an early lead at Northern Ireland, gave it up with an own goal in the 88th, then saw the home team strike a post in stoppage time. Slovakia advanced 2-1 with a 110th-minute goal by Michal Ďuriš.

North Macedonia’s 1-0 win at Georgia was earned by 37-year-old captain Goran Pandev’s goal early in the second half.

The biggest winners were Hungary and Scotland. They are among the 12 host nations scattered across Europe and now get two home games in the group stage next June.

Currently ranked No. 65 by FIFA, North Macedonia joins Finland as the only major tournament newcomers next year.

The qualifying format guaranteed a tournament place for a low-ranked country that won a group in the bottom tier of the inaugural Nations League played two years ago.

Hungary’s reward is landing in the toughest group — at home against defending champion Portugal and 2018 World Cup winner France, then heading to Munich to play 2014 world champion Germany.

Still, Hungary should relish the challenge after seeming to be heading out because of a bad goalkeeping error.

Iceland missed clear chances to double the lead before Hungary tied it up when Loïc Nego pounced on a loose ball in the goalmouth.

SCOTLAND PERFECT FROM THE SPOT

Scotland had never been involved in a penalty shootout in any major competition until one month ago, in the playoff semifinal against Israel.

Scotland produced an assured display against favored Serbia and took the lead through Ryan Christie’s low, left-foot shot in the 52nd that glanced in off a post.

Real Madrid forward Luka Jović leveled in the 90th with a bouncing header at a corner, but Serbia did not turn its extra-time momentum into a goal.

Scotland now has two games in Glasgow — against Serbia’s neighbor Croatia and the Czech Republic — plus a Wembley Stadium trip to face England and revive the oldest rivalry in international soccer.

At age 37, Pandev captains a North Macedonia national team that is 11 years younger than him. The former Yugoslav republic became an independent member of FIFA and UEFA only in 1994.

Playing in his 114th international, Pandev netted his 36th — and by far most important — goal for his country to cement his status as a national hero.

The game was perhaps the biggest in the history of two young soccer nations, but no fans were allowed into the 54,000-seat national stadium in Tbilisi.

North Macedonia goes into Group C hosted by the Netherlands and Romania. It faces Austria and Ukraine in Bucharest before taking on the top-seeded Netherlands in Amsterdam.

The only playoff to have spectators in the stands saw around 1,000 Northern Irish fans lament missing out on back-to-back Euros qualifications.

The Slovaks go into Group E hosted by Ireland and Spain. They will play Poland and Sweden in Dublin, then travel to Bilbao to face 2008 and 2012 champion Spain.