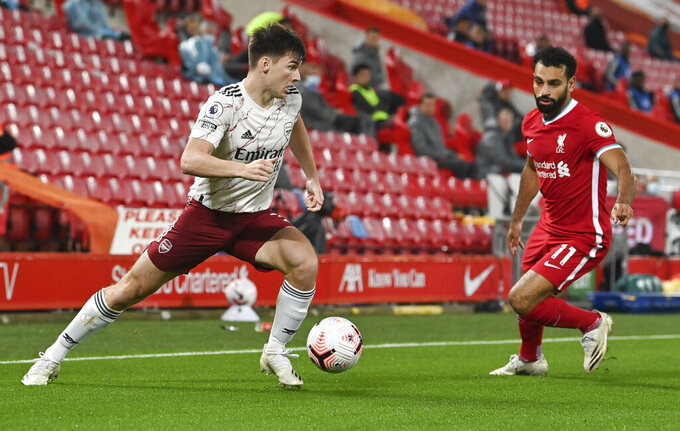 GLASGOW (AP) — Scotland has lost three players, including Arsenal defender Kieran Tierney, from its squad for a European Championship playoff on Thursday after UEFA-mandated COVID-19 tests.

The Scottish soccer federation said Wednesday that midfielder Stuart Armstrong tested positive, and Tierney plus Ryan Christie were classed as “close contacts” and must self-isolate.

All three players are unavailable to face Israel in a Euro 2020 playoff in Glasgow on Thursday.

“I’m so disappointed and frustrated to be in this situation," Tierney said in a statement published by Arsenal. “I have adhered to all regulations and made sure I was socially distancing from my teammates in the hotel.”

The winner at Hampden Park will advance to play away against Norway or Serbia on Nov. 12 with a place at Euro 2020 at stake. Scotland is one of the 12 host nations and would have two home games in the group stage if it qualifies.

Tierney and Celtic’s Christie were in Scotland’s starting lineup against Israel in a Nations League game last month. Armstrong came on as a substitute in a 1-1 draw at Hampden.

Israel is missing two starters from last month's game, Taleb Tawatha and Dor Peretz, who since tested positive for the virus.

The Scottish federation said Armstrong started a 10-day self-isolation on Tuesday. That expires before his club Southampton next plays in the Premier League.

Tierney and Christie have begun 14-day quarantine periods that should rule both players out of their next club games on Oct. 17. Arsenal is away to Manchester City and Celtic hosts Rangers in an Old Firm derby.

Arsenal said Tierney had “broken no rules regarding COVID-19 protocols” and the club was seeking more details of the player's case.

The Euro 2020 playoffs begin Thursday with 16 teams competing for the last four places in a 24-nation lineup. The finals tournament is now scheduled to begin in June 2021, delayed a year due to the pandemic.