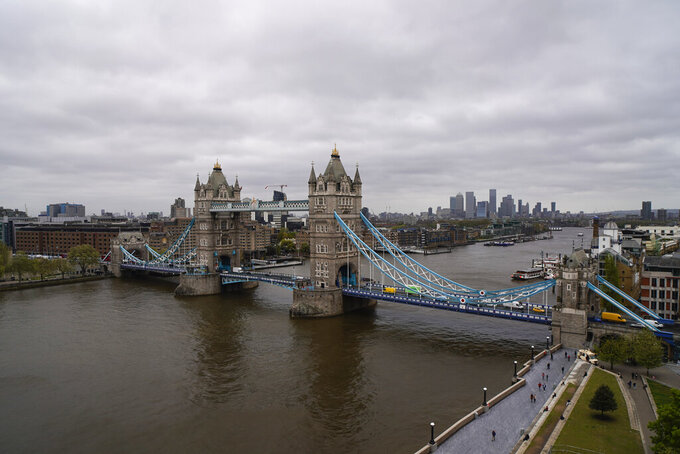 Tower Bridge in London, Saturday, May 8, 2021, against the backdrop of the skyline of the financial district. On what was dubbed Super Thursday, around 50 million voters were eligible to take part in scores of elections in the UK, some of which had been postponed a year because of the pandemic that has left the U.K. with Europe’s largest coronavirus death toll. (AP Photo/Alberto Pezzali)

LONDON (AP) — The Scottish National Party won its fourth straight parliamentary election on Saturday and insisted it will push on with another referendum on Scotland's independence from the U.K. even though it failed by one seat to secure a majority.

Final results of Thursday's election showed the SNP winning 64 of the 129 seats in the Edinburgh-based Scottish Parliament. The result extends the party's dominance of Scottish politics since it first won power in 2007.

Other results from Super Thursday's array of elections across Britain emerged Saturday, including the Labour Party's victory in the Welsh parliamentary election. Labour's Sadiq Khan was also reelected mayor of London.

The election with the biggest implications was the Scottish election, as it could pave the way to the break-up of the United Kingdom. The devolved government has an array of powers but many economic and security matters remain within the orbit of the British government in London.

Though the SNP won the vast majority of constituencies, it failed to get the 65 seats it would need to have a majority as Scotland allocates some by a form of proportional representation. Though falling short, the SNP will be easily able to govern for the five-year parliamentary term with the eight members of the Scottish Greens, who also back Scottish independence.

SNP leader and Scotland's first minister, Nicola Sturgeon, said her immediate priority would be steering Scotland through the coronavirus pandemic and that the legitimacy of an independence referendum remains, SNP majority or not.

“This is now a matter of fundamental democratic principle,” Sturgeon said. “It is the will of the country.”

U.K. Prime Minister Boris Johnson, the leader of the Conservative Party, would have the ultimate authority whether or not to permit another referendum on Scotland gaining independence. Johnson appears intent on resisting another vote, setting up the possibility of renewed tensions between his government and Sturgeon’s devolved administration.

The prime minister wrote in the Daily Telegraph newspaper published Saturday that another referendum would be “irresponsible and reckless” in the “current context” as Britain emerges from the pandemic.

He has consistently argued that the issue was settled in a September 2014 referendum, when 55% of Scottish voters favored remaining part of the U.K. Proponents of another vote say the situation has changed fundamentally because of Brexit, with Scotland taken out of the European Union against its will. In the 2016 Brexit referendum, 52% of the U.K. voted to leave the EU while 62% of Scots voted to remain.

Sturgeon said it would be wrong for Johnson to stand in the way of a referendum and that the timing is a matter for the Scottish Parliament.

There's been growing talk that the whole issue may end up going to court, but Sturgeon said the “outrageous nature” of any attempt by the British government to thwart the democratic will of Scotland would only fuel the desire for independence.

“I couldn't think of a more powerful argument for independence than that,” she said.

The Scotland results have been the main focus since an array of local and regional elections took place Thursday across Britain, in which around 50 million voters were eligible to vote.

In Wales, the concluded vote count showed Labour doing better than expected as it extended its 22 years in control of the Welsh government despite also falling one seat short of a majority. Mark Drakeford, who will remain first minister, said the party will be “radical” and “ambitious.”

Ballots continue to be counted from local elections in England, which already have been particularly good for Johnson’s Conservative Party, notably its victory in a special election in the post-industrial town of Hartlepool for a parliamentary seat that Labour had held since 1974.

That win extended the party’s grip on parts of England that had been Labour strongholds for decades, if not a century. Many seats that have flipped from red to blue voted heavily for Brexit. The speedy rollout of coronavirus vaccines also appears to have given the Conservatives a boost even though the U.K. has recorded Europe's highest COVID-related death toll at 127,500.

For Labour's new leader, Keir Starmer, the Hartlepool result was a huge disappointment and has led to another bout of soul-searching in a party that in 2019 suffered its worst general election performance since 1935.

Starmer said he would soon set out a strategy of how it can reconnect with traditional voters. He hasn’t given details though is thought to be considering a rejig of his top team, starting off with removing his deputy, Angela Rayner, from her roles of party chair and campaign coordinator.

Though Labour is clearly losing ground in its traditional heartlands, its support held up in other parts of England, such as the big cities.

In London, Sadiq Khan won a second term in elections delayed by a year because of the pandemic. He secured 55.2% of the vote once second preference votes were counted, beating his Conservative rival Shaun Bailey got 44.8%. Khan's winning margin was down slightly on last time.

The party also won other mayoral races, including Steve Rotherham in the Liverpool City Region, Andy Burnham in Greater Manchester and Dan Norris in the West of England region, which includes the city of Bristol.

The Conservatives' Andy Street, meanwhile, was reelected as mayor of the West Midlands, which includes the city of Birmingham.