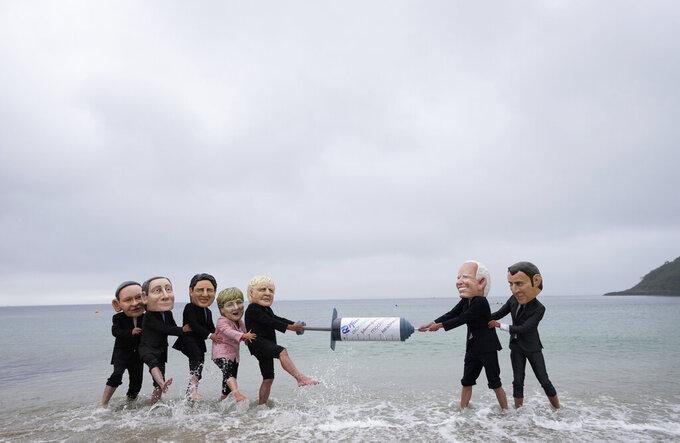 BRUSSELS (AP) — Over the four years of Donald Trump's presidency and through the seeming eternity of pandemic misery and isolation, America’s partners in world affairs were waiting to exhale.

As they cycled through Group of Seven, NATO and European Union summits over the last week, exhale they did, between bites of haggis mousse, pineapple weed and Dover sole.

This, despite tensions in the club over this (the Brexit sausage war), that (how to confront China) and the other thing (U.S. steel duties). But those were nothing like the tensions shaping up in Geneva on Wednesday when Biden meets Russian President Vladimir Putin.

Hands-on diplomacy is Biden's wheelhouse and this was his first chance to exercise it on the broadest scale as president. Yet for all of his decades on the diplomatic circuit, most of today's leaders were strangers to him.

Everyone set out to fix that in a tableau of the powerful and privileged that moved from a seaside English resort in Cornwall to the gleaming headquarters of NATO and then the seat of the European Union, both in Brussels.

A core number of His Excellencies and Her Excellencies — diplo-speak for heads of government — converged repeatedly as the gathering for the G-7's seven government and two European institutional leaders morphed into the summit for the 30-member NATO alliance. Then came Biden's meeting with EU leaders.

Shooing away the press in Cornwall, British Prime Minister Boris Johnson groused that what was meant to be a series of fireside chats had turned into a “giant media circus at which we have to greet each other several times." And that was when the first summit was only getting started. In truth, world leaders always attract keen attention.

The so-called family photos taken for posterity by the summiteers followed a precise drill and offered the spectacle of seeing powerful people bossed around by a disembodied voice on a loudspeaker.

At NATO's futuristic headquarters, that voice told the 28 or so leaders standing on their assigned spots to remove their masks, look at the camera for 15 seconds, then turn to be photographed watching a video about the alliance. Then: “Please put your masks back on and proceed to Room One.”

Biden was relentless with his “America is back” mantra. The networking was intense, too.

The most tactile of politicians, the safely vaccinated Biden was eager to offer an arm clasp or a backslap, shrugging off the social distancing that dominated so much of his life for nearly a year and a half. Biden’s smiles for Canadian Prime Minister Justin Trudeau only seemed to get bigger as the week went on.

Moments after Biden arrived at the G-7, Macron made a beeline for him. The two men warmly engaged in what could have been a contest as to who could touch the other's arms the most. The two men saw each other again in a variety of settings at the seaside site: a small conference room with sweeping views, a lush garden where they had an audience with the royal family, a beach where they watched fighter jets fly overhead.

Days later at NATO, Macron zipped over to Biden again, chatting with him like old friends — to the point where NATO Secretary General Jens Stoltenberg had to politely but repeatedly call the meeting to order and nudge Macron to his own chair.

There was palpable relief to have moved on from what German Chancellor Angela Merkel once called Trump's “sobering and a bit depressing" summit behavior.

“Mr. President, dear Joe, we are so pleased to welcome you in Brussels,” Ursula von der Leyen, president of the European Commission, told him Tuesday. “Indeed, the last four years have not been easy.”

On Monday, Italian Premier Mario Draghi was explicit in blaming Trump for weakening fundamental alliances. “Note that President Biden’s first visit is to Europe," he said, “and try to remember where President Trump’s first visit was.” It was to Saudi Arabia.

In the summits of his era, Trump threatened G-7 partners with trade penalties, retracted his endorsement of the group's 2018 communique in anger over comments by Trudeau, the host that year, and found himself to be an outlier in calling for Russia to be admitted to the group. Last year's G-7 summit was canceled because of the coronavirus.

In Britain and Belgium, some of those clouds seemed to lift. Old verities were back — Russia is once again the recognized adversary. Most differences were papered over instead of magnified. The U.S. and EU announced the resolution of a long-running trade dispute. Biden wore a NATO pin on his lapel.

There was lightness, too, on the beaches of Cornwall, a cautious sense of impending freedom from the pandemic even as Britain extended its partial lockdown because of a rise in infections among the unvaccinated from the delta variant.

On a boardwalk over the sand of Carbis Bay, Johnson and his wife Carrie, greeted a procession of the leaders and spouses in the opening hours. “I feel like we are at a wedding," Jill Biden said. Johnson likened the ritual to walking down the aisle, which he and his new spouse had done in their actual wedding last month.

Protesters gathered as well, in ways they could not have done in the thick of the pandemic. Among them, Surfers Against Sewage deployed protesters on surfboards and kayaks to press for more action on cleaner oceans.

Some dressed as jellyfish. Some wore masks — but they were costume masks mocking the faces of the politicians on shore. They were all exhaling, too.