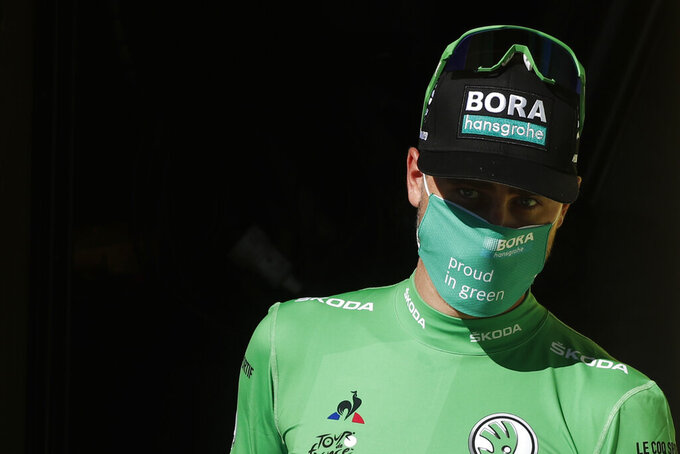 Slovakia's Peter Sagan wearing the best sprinter's green jersey arrives on the podium after the seventh stage of the Tour de France cycling race over 168 kilometers (105 miles), with start in Millau and finish in Lavaur, Friday, Sept. 4, 2020. (Benoit Tessier/Pool via AP) 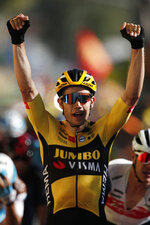 LAVAUR, France (AP) — The most thrilling day of racing so far at the Tour de France produced multiple winners Friday, kick-starting the race that had been something of a slow-burner and setting the stage for more hard riding this weekend in the high mountains of the Pyrenees.

Wout Van Aert took the Stage 7 victory. It was the resurgent Belgian rider's second win at this year's race.

Defending champion Egan Bernal and other top contenders for the overall title dealt a blow to principal rivals by leaving them behind in crosswinds on the speedy approach to the finish.

Three-time world champion Peter Sagan got back the green jersey awarded to riders who collect the most points in sprints, after his team caused havoc on the road by riding furiously from the start.

“A really tough day,” Yates said. “We never really had a rest.”

After two relatively quiet stages, the 168-kilometer (104-mile) route into southwest France from Millau to Lavaur had also seemed ho-hum on paper. But it delivered an electroshock ahead of a weekend of climbing in the Pyrenees, with start-to-finish surprises.

Sagan's Bora-Hansgrohe teammates rode like furies from the get-go, setting a pace so punishing that Bora rider Emanuel Buchmann set a new top speed so far at this Tour: a whopping 96 kilometers (60 miles) per hour. Many of Sagan's sprinting rivals couldn't keep up.

Among them were Alexander Kristoff, the winner of Stage 1, and Caleb Ewan, who won Stage 3. Also dropped was Sam Bennett, who started the stage wearing the green jersey that Sagan covets. Sagan has already won the points-for-sprints competition a record seven times at previous Tours and is gunning for an eighth win when the Tour finishes Sept. 20 in Paris.

In a mid-stage sprint and again later at the finish, Sagan picked up sufficient points to wrest back the jersey from Bennett. Sagan might have collected more had his chain not caught as he weaved to the line. He placed only 13th, a meager reward for his teammates' untiring work in more than three hours of racing.

“They did an extraordinary job,” Sagan said. “I didn't have any luck in the sprint because my chain got a bit stuck.”

Van Aert made his own luck, unstoppable in the final dash. He also won Stage 5. He suffered a serious leg injury at last year's Tour that sidelined him for months. But the three-time cyclocross world champion is becoming a dominant force this year in a cycling season upended by the coronavirus pandemic, which pushed back the Tour from its usual slot in July.

“I’m really proud of this one," he said. “Straight from the gun, it was all out."

After Sagan's team shattered the pack and distanced rivals at the stage start, Bernal's teammates inflicted further pain by taking advantage of winds that swept across the flat approach to the finish. Dizzying accelerations by Polish rider Michal Kwiatkowski with 35 kilometers (20 miles) left to race dropped several contenders for the podium in Paris.

Among them: Tadej Pogacar, a Slovenian rider who'd been third overall at the stage-start but who has now dropped back to 16th, one minute and 28 seconds behind Yates. Also caught out by the winds and pace that prevented them from making up the lost ground were Australian rider Richie Porte, fifth at the Tour of 2016, and Spanish rider Mikel Landa, a top-10 finisher at the last three Tours.

To ride back into contention, they may be tempted to try something on the Pyrenees' climbs. But since neither of the stages on Saturday and Sunday finish with steep uphills, top contenders such as Bernal and his principal rival Primoz Roglic are more likely to save their energies as much as possible for tougher challenges in the second and third weeks.

“We know the climax is going to be the last week," said Marc Madiot, general manager of the French team Groupama-FDJ.

He said the coronavirus pandemic is part of the reason that this Tour so far hasn’t matched last year’s edition for excitement.

“To those who are watching the Tour de France and think it’s a show, I say that first and foremost that it’s a sporting event and in a sports events there are highs and lows. If they want spectacle, they can watch a TV reality show and perhaps be less disappointed,” he said.

“This is an exceptional year. We had an extremely long lockdown, where people were confined at home. We resumed training and rejigged training and competition schedules,” he added. “The riders came here with some 10 days of competition under their belts, which is three times less than normal. Usually, we get to the Tour de France with 35 to 40 days of racing.”