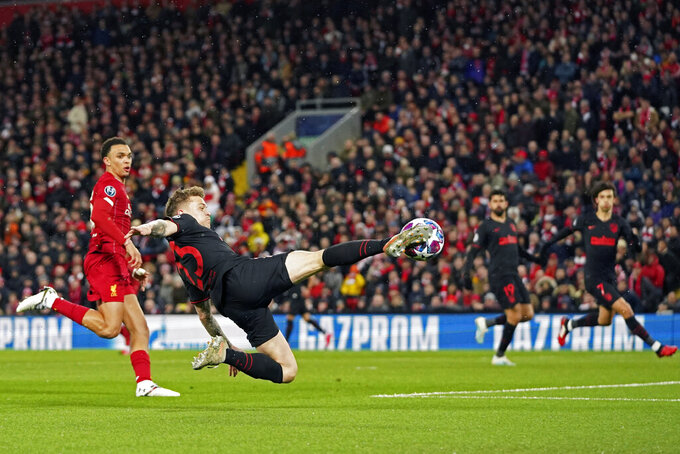 Atletico Madrid's Kieran Trippier attempts a shot at goal in front of Liverpool's Trent Alexander-Arnold during a second leg, round of 16, Champions League soccer match between Liverpool and Atletico Madrid at a packed Anfield stadium in Liverpool, England, Wednesday, March 11, 2020. (AP Photo/Jon Super)

LIVERPOOL, England (AP) — Wandering around the concourses of the third tier of Anfield’s main stand provides a glimpse into the past.

To the last day of normality in English soccer, before the world changed.

One year later, the betting boards are still filled with the odds for Liverpool’s Champions League meeting with Atletico Madrid.

That game, on March 11, 2020, was the last time an English stadium had a capacity crowd. That same day, the World Health Organization declared the COVID-19 outbreak a pandemic.

On the one-year anniversary, most games around Europe were still being played in empty stadiums. But after an initial total shutdown of soccer and fears that clubs may go bankrupt because of the loss of ticket revenues, the sport seems to have emerged largely intact. And with vaccine rollouts gathering pace across Europe, there is hope that fans will soon be back in the stands.

“We are no longer in full crisis,” Andrea Agnelli, the Juventus chairman who leads the European Club Association, said this week.

But it's been a year where soccer became directly intermingled in the politics of trying to control the spread of the coronavirus.

The British government initially ruled out any restrictions on sports events, and the Liverpool-Atletico game went ahead with a capacity crowd of 52,267 fans. At that time, Spanish authorities had already imposed a ban on events in Madrid with more than 1,000 people.

In the end it was the Premier League itself that decided to pause for 100 days after prominent infections at Arsenal and Chelsea.

In France, the domestic league was abandoned entirely on government orders, while the other major leagues also took long breaks. The 2020 European Championship was postponed until 2021, as was the Copa America in South America. The Champions League wasn't completed until August in empty stadiums in Lisbon.

After the initial lockdown, fans were briefly allowed to return in pockets of Europe —- Liverpool was allowed up to 2,000 supporters in December at Anfield — but the second wave of infections and the spread of new variants sparked new lockdowns.

“Especially at Liverpool we missed (the fans) because we have the most special atmosphere probably in the world of football," Liverpool manager Jürgen Klopp said this week. “So it’s clear it makes a massive difference.”

At least there was no second complete shutdown of soccer in Europe, which helped prevent the financial apocalypse feared at the start of the pandemic.

But there has been a significant impact caused by the loss of matchday and commercial revenue, and rebates owed to broadcasters due to the disruptions to the schedule.

Agnelli, the ECA head, warned in January that European football teams face losing up to $10 billion due the pandemic.

Juventus has already revealed that losses more than doubled year-on-year to 113 million euros in the final six months of 2020. The Italian champion was among leading clubs to convince players to waive parts of their salaries. Arsenal and Barcelona also got their millionaire stars to accept pay cuts.

Barcelona has still been one of the clubs hardest hit as the pandemic compounded its existing financial problems. The Catalan club currently has debts over 1 billion euros. The Premier League fears clubs are losing 100 million pounds ($140 million) a month as long as the turnstiles remain locked.

The impact of the pandemic was noticeable in the January transfer window when spending across England, Spain, Italy, Germany and France dropped from almost 1 billion euros in 2020 to around 275 million euros this year.

“I don’t think the market will ever go back to where it was because the business models were sometimes too stretched,” said Andrea Sartori, KPMG’s global head of sports. “So I think the crisis has helped rethink the overall business model of football because it’s hard to operate in an industry where many, many clubs are operating in a cost to revenue ratio which is well in excess of 65% like Barcelona.”

Postponing Euro 2020 has already cost UEFA hundreds of millions of euros. That's why the governing body is determined to have stadiums at least half-full when the tournament goes ahead across the continent in June and July.

The lingering financial damage caused by pandemic to the wider economy is also felt by soccer clubs, as it could have an impact on sponsorship deals and broadcasting revenue. The Premier League is in the midst of auctioning TV rights to the world’s richest soccer competition and could be in for a shock.

“There’s certainly going to be a rights correction and it may be seen and interpreted by many as rights deflation,” said Simon Green, the head of BT Sport, which airs Premier League games in England.

But the overall outlook is a lot more optimistic than it was when soccer was largely shut down across the continent, and no one knew for sure when it might resume.

“We are now starting to see the light at the end of the tunnel,” La Liga President Javier Tebas said. “In spite of loss of income of 2 billion euros, it could have been 7 billion euros. Especially the large clubs have been able to cope throughout this crisis.”