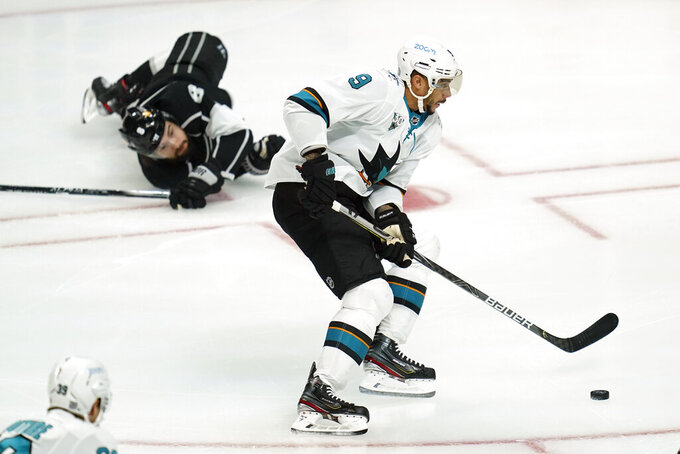 SAN JOSE, Calif. (AP) — After spending training camp in Arizona and the first 12 games of the season on the road, the San Jose Sharks were happy for the opportunity to get back home finally and prepare for their first game at the Shark Tank in nearly a year.

The Sharks opened the season as the NHL’s vagabonds because of COVID-19 protocols in Santa Clara County, California, spending most of the past seven weeks either at their temporary base in Arizona or traveling to games.

That all comes to an end Saturday when they play their first home game in more than 11 months against the Vegas Golden Knights.

“It took me a little bit to get my bearings walking around our room,” captain Logan Couture said Friday before the team’s first skate at SAP Center since the NHL lockdown for the coronavirus pandemic last March.

“We made some improvements in the locker room. So it’s nice. The seating arrangement is obviously a lot different now. You got guys kind of spread out all over this place with the new rules from the league and the P.A. But it’s nice to be back here. It was nice waking up in my own bed this morning and all that. So, yeah, it’s nice.”

The Sharks have had a most unusual start to the season because of county rules that banned contact sports and practices because of coronavirus concerns.

They left for Arizona the last week of December to hold training camp there and then were scheduled to open the season with eight straight road games.

They were supposed to play two “home” games last week that had been moved to Arizona but those ended up getting postponed anyway because one Vegas player and three coaches were sidelined under COVID-19 protocols.

That allowed the Sharks to return home to practice for a few days before heading to Southern California for four games that extended the season-opening road trip to 12 games.

Now they are ready for their first game in San Jose since a 6-2 loss to Chicago last March 8.

“We’ve talked about how long we’ve been on the road,” coach Bob Boughner said. “Any time you get a chance to come home and be with family and be able to sleep in your own bed and not have to go through all the protocols and things that we do in a hotel on a daily basis for the last month and a half, I think it’s going to be a good thing. Hopefully it will treat us well. I think the biggest thing, obviously, from a coaching standpoint is just trying to get better matchups and being able to put the right guys on the ice, the right times.”

After finishing last season with the worst record in the Western Conference, the Sharks have struggled to get into a groove early this season.

But now they get to play 28 of their final 44 games at home.

“There’s nothing we can do now,” Couture said. “We can’t look back, we have to look forward. We played 12 road games. We haven’t played at home yet. So we’ve got to have a better than winning record at home and continue to play around .500, if not better, on the road. Usually the teams that do that, they find themselves in the playoffs at the end of the year.”