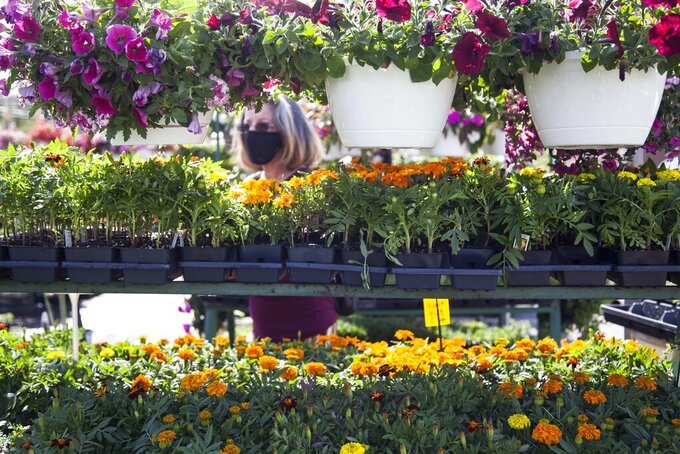 In this May 7, 2020 photo, A masked shopper browses the flower selection at The Plant Stand, an outdoor market at 3100 Godfrey Road, in Godfrey, Ill., which recently obtained permission to open as an essential business weeks after a statewide stay-at-home order shuttered many Illinois businesses. The Plant Stand is one of few independent garden centers that received clearance to open, owner Dave Galbreath said, mainly due to selling vegetables. (Jeanie Stephens/The Telegraph via AP)

GODFREY, Ill. (AP) — Local garden centers are seeing more sales than ever this spring compared to years prior, as many residents are taking the opportunity while sheltering-in-place to spruce up their outdoor spaces.

“People who normally don’t garden, are gardening and everybody is trying to do something in their yards now, so the business has been continual,” she said. “I call it ‘Mother’s Day times a thousand,’ and it’s been like that since about four weeks ago.”

The Plant Stand’s Susan Bell expressed a similar experience at its location.

“This has been nuts,” she said. “It really has been. Last week, we had to open two registers and I think he (owner Dave Galbreath) is thinking to open a third one for Mother’s Day weekend just because the lines get so long and people can’t shop.”

Being just their second year at the current location, The Plant Stand has already grown its selection to meet the demand and intends to keep stocking as needed and the supply allows.

“Availability is still good now, but it’s going to have a bearing on late June, what’s still left to sell.”

The Plant Stand is “one of the lucky few” independent garden centers that received clearance to open, Galbreath said, mainly due to selling vegetables. Open since approximately April 20, the all-outdoor market also has a bit of an advantage in that customers never have to crowd inside an indoor store and are able to come and go in a comfortable manner, even amid concerns over the coronavirus.

“They’ve determined that we’re essential, which is great,” Galbreath said. “It was really just a matter of the state clarifying some mandates that went out, which included independent garden centers. It was a little confusing.”

Although Galbreath’s market doesn’t sell hard goods, like, mulch and rock, he said customers are buying flats of flowers and some of everything.

“They’re doing more in their yards than they probably ever have, all at once,” he said.

Bell noted that the different colors are what seem to be attracting a lot of people.

“People are looking for color, not so much bushes, yet,” ,” she said. “Everybody just seems to really want a lot of color.”

On the other hand, at Market Basket, Kasten said she’s noticed a higher demand for mulch and rock.

“The topsoil and mulches, I’m having a hard time keeping in stock, and everybody wants to do rock,” she said.

“My deliveries, which I’m normally only a week out, I’m now more like three weeks out. It’s just incredible, absolutely incredible.”

Despite the increase in overall business and stress that some people may be experiencing with business closures, both Bell and Galbreath said that customers have been especially nice, friendly and patient at their location

“Everybody has been extra kind out here,” Galbreath said. “I haven’t had any real frustration. Everybody’s just been glad to be outside.”