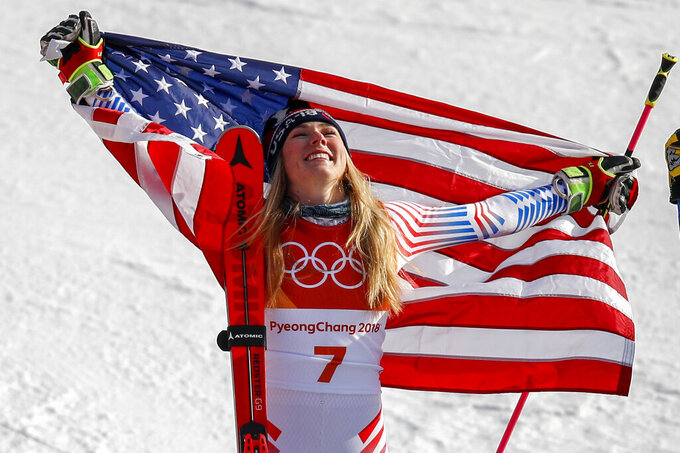 FILE - Mikaela Shiffrin, of the United States, celebrates her gold medal during the venue ceremony at the women's giant slalom at the 2018 Winter Olympics in Pyeongchang, South Korea, Feb. 15, 2018. Shiffrin will defend her giant slalom gold medal in the first women's Alpine skiing event of the Beijing Olympics. (AP Photo/Jae C. Hong, File)

BEIJING (AP) — Bode Miller remembers first seeing Mikaela Shiffrin ski, more than a decade ago. She was in her early teens, not yet old enough to compete at the sport’s top level; he already owned a handful of Olympic medals and a pair of World Cup overall titles.

The Americans were training at Golden Peak in Vail, Colorado, and Miller was impressed by the junior across the way. Her slalom style brought to mind Vreni Schneider, a Swiss racer in the 1980s and 1990s who was a three-time Olympic champion.

“Almost like she wasn’t moving down the hill. There just wasn’t the variables that it felt like were always present in my skiing, which was this three-dimensional wobble in every direction. Seemed like she was just moving laterally, just dut-dut-dut-dut-dut-dut-dut-dut-dut,” Miller said in a telephone interview with The Associated Press, mimicking a metronome’s back-and-forth clicking. “Effortlessly staying in balance.”

Everyone in Alpine skiing keeps an eye on Shiffrin nowadays, of course, and the rest of the world will do so at the Beijing Olympics starting Monday, when she will be the defending champ in the giant slalom.

“She’s physically spectacular as a ski racer with strength and her general physiology. She had the right upbringing. Great support,” said Miller, whose six Olympic medals are tied for the second most in Alpine history. “She just has a lot of gifts to work with. Fortunately, she has the intangibles that partner up with those really well. Her tactical knowledge and awareness is really strong. She just doesn’t make the same errors that other people make. And that’s a function of technique, but it’s also just tactics. It’s her approach, her understanding, of how to get from Point A to Point B quickly enough to win without taking any undue risk.”

Mike Day, in his sixth season as Shiffrin’s main coach with the U.S. ski team, recalls his first chance to watch her: a slalom during a youth event at Sunday River Resort in Newry, Maine.

“Prior to that, I only ever heard her name and the lore of ‘Mikaela Shiffrin,’” said Day, who worked for a ski company at the time.

“The race is still vivid for a couple of reasons. First, her skiing was just phenomenally high level for that age. Technical proficiency and tactical proficiency was mind-blowing. But the second reason was she won the race by 10 or 12 seconds. ... I remember saying to a friend of mine on the hill that day: ‘That girl should be skiing (in the) World Cup next year, without a doubt,'” Day said in a video interview. “I think I was one of a million people that probably said the same thing.”

What makes Shiffrin so successful?

Why does two-time Olympic gold medalist Ted Ligety describe her slalom as “a textbook of skiing technique”?

“When Steph Curry shoots a 3 from just inside of half court, you’re like, ‘Oooh!’ You and I don’t know what he just did, but it looks like it’s supposed to look, and it went in," Day said. "It's just (being) really naturally gifted in the event, with timing and position and placement of the turn. All of those things are critical, as well as a million other elements — and she just does them all really well.”

It wasn’t until Mikaela was 16 that Eileen Shiffrin first realized her daughter “might be competitive at a World Cup level.”

Bit of an understatement there.

Mom — who still serves as a coach — and Patrick Riml, in charge of the U.S. Alpine team then, stood together at a training camp in Loveland, Colorado, ahead of Mikaela's first full World Cup season in 2011-12.

“He really thought Mikaela would be right in there with her. I was surprised to hear him say that. ... We just knew there was a much bigger pond out there than what she had been swimming in up to that point in her life,” Eileen wrote in an email to the AP. “Hearing that from Patrick was sort of crazy and made us think: Hmmm, maybe she WILL be actually doing this.”

Eileen thinks the way she and her late husband, Jeff, showed Mikaela and her older brother, Taylor, how to ski as kids influences them on the mountain today.

“She was taught from a young age to be very disciplined — for better or for worse. Jeff and I taught Taylor and Mikaela that, way before we even considered they might race, mostly for safety’s sake on the hill,” Eileen wrote. “But also, Jeff was such a beautiful skier; he wanted to share the joy of carving those beautiful turns he made. ... They developed similar form.”

When Shiffrin took on the sport's elite, she quickly made an impression.

That's about skill, certainly, but something else, too.

“You could see immediately she was talented and had something more than ‘normal’ people, than ‘normal’ athletes," said Marta Bassino of Italy, who won the World Cup giant slalom title last year.

So how is Shiffrin unique?

U.S. Alpine Director Jesse Hunt praises her for being “talented, talented" and “a really hard worker” and possessing an enviable “ability to compete.”

Keely Cashman, a Californian making her Winter Games debut, finds that Shiffrin “always is super calm and collected, which is something that I would like to have on race day.” Another first-time Olympian, River Radamus of Colorado, notes “how graceful she makes it look and how easy she makes it look.”

Mauro Pini, a coach for Petra Vlhova, the Slovakian who won last season’s World Cup overall title and is second to Shiffrin in the current standings, pondered the question and offered a simple assessment of the American: “She doesn’t do anything different. She does it better.”