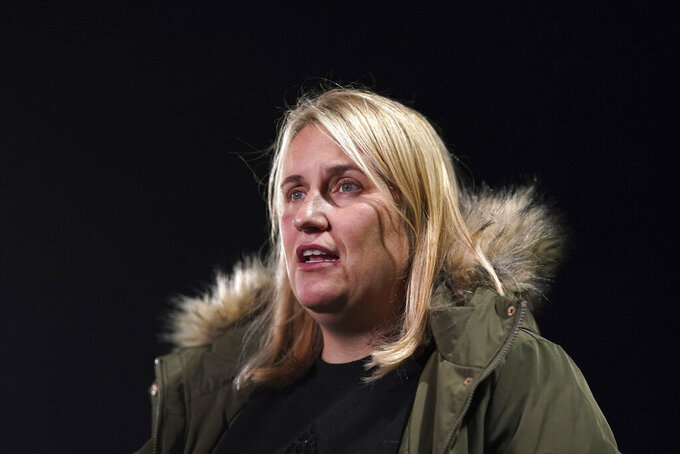 It is the second year for the awards, which celebrate athletes, activists, executives and journalists who have advanced the women's game.

Sinclair, the top all-time international goal-scorer among men and women, won the gold medal at the Tokyo Olympics as the captain for Canada. Teammate Quinn became the first transgender nonbinary athlete to openly compete in the games.

Formiga recently retired from the Brazilian national team after appearing in a record seven World Cups. Alexia Putellas of Spain, who plays professionally for Barcelona, was honored earlier this week with the Ballon D'Or.

Farrelly and Shim came forward in late September with allegations of sexual harassment and coercion against North Carolina Courage coach Paul Riley, which he denied.

Riley was fired and National Women's Soccer League Commissioner Lisa Baird stepped down. Both the NWSL and U.S. Soccer have commissioned independent investigations into the allegations.

McCollough alleged that Washington Spirit coach Paul Riley was abusive toward players and he was dismissed by the NWSL for violation of the league's antiharassment policy.

The revelations shook the women's professional league. In all, five league coaches, all men, have been dismissed or stepped down this season amid allegations of inappropriate behavior.

“This platform gives us the unique opportunity to celebrate eleven individuals who are championing women’s soccer in their respective fields each year,” said Susie Fiore, head of the Women's International Championship Cup. "Without the achievements of the 2021 honorees, the women’s game would not be in its current place, and we are grateful to have the opportunity to share their stories with our fans.”

New York-based Relevent Sports Group puts on the International Champions Cup for men’s and women's club teams each summer. The women’s tournament was held this August at Providence Park and the host Portland Thorns downed Lyon 1-0 for the title. The Best IX is sponsored by Ally Financial.