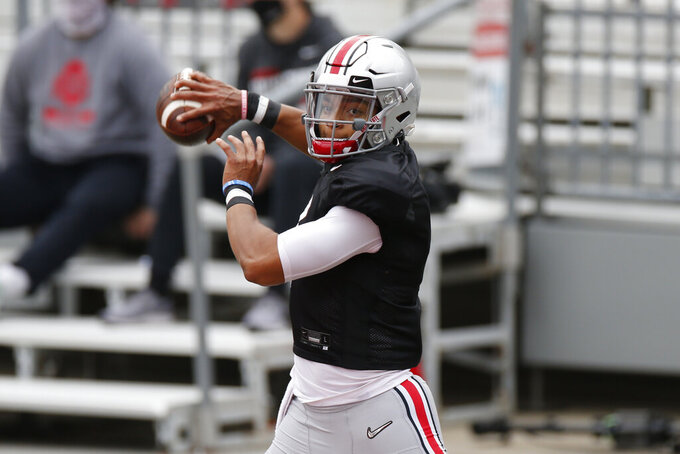 FILE - In this Oct. 3, 2020, file photo, Ohio State quarterback Justin Fields throws a pass during their NCAA college football practice in Columbus, Ohio. Fields returns for a second season as Ohio State starter. Coaches and teammates say Fields is in better shape because of diet and workout regimen, and is a more confident and vocal leader. (AP Photo/Jay LaPrete, File)

COLUMBUS, Ohio (AP) — Not knowing when or if Ohio State was going to play in 2020, Justin Fields never stopped working toward another college football season. He stayed in Columbus, embraced a vegan diet and filled his days with physical conditioning and regular sessions of video study and field work under the tutelage of head coach Ryan Day.

As the Buckeyes prepare for their Oct. 24 opener against Nebraska, the 21-year-old quarterback's determination is palpable, even in his Zoom interviews with reporters.

“I know the time's ticking, so I'm just more anxious and anxious every day until game day comes," Fields said Tuesday. “I know I've said it 10 times, but y'all don't know how excited I am to play.”

Fields transferred from Georgia last year, lured by Day to be the successor to star Dwayne Haskins Jr. He blossomed as expected, leading Ohio State to a national semifinal game and emerging as a Heisman Trophy finalist while battling through a late-season knee injury that made it difficult to even walk at times.

He finished third in the Heisman derby, which was a landslide for former Buckeyes quarterback Joe Burrow, who won the national title at LSU and now starts for the Cincinnati Bengals.

Fields likely will be playing in the NFL next fall whether or not he plays another down of college football. He could have opted out of this pandemic-shortened season but wanted one more shot at the Heisman and a national title with a team he's convinced can get there.

Fields patiently waited out the Big Ten as the conference shelved the season for about five weeks due to coronavirus concerns before reversing course. Instead of moving on, he spearheaded an online petition that was signed by hundreds of thousands of people urging the Big Ten to start back up.

“I think when you have a year under your belt, you realize the consequence of every game, every snap, the preparation that comes into every play,” Day said. “He asks the right questions going into practice if he’s not sure. He makes sure he has it right. And he’s also holding people accountable."

Day added: “If (the play) doesn’t work it’s usually on the quarterback, the offensive coordinator and the head coach. He understands that now. So if things aren’t exactly the way he sees it, he gets with (us). His leadership has been excellent.”

Fields put up gaudy numbers last season (3,273 yards, 41 touchdowns, three interceptions) in his first year working in Day’s system, for which the creative, mobile quarterback is an ideal fit. But entering Year 2 there is a deeper understanding of the scheme and the goals.

“Last year I was kind of new to the playbook so (coaches) would give me the play and be like, ‘Yo, it’s most likely going to be this guy, this guy or this guy open in certain places,’” Fields said. This time around, “I happen to ask why we’re calling a certain play, or what coach Day’s goal is when it comes to calling that certain play."

“I'm trying to think more like him and be that coach on the field,” he said.

Fields is blessed with a great supporting cast. The Ohio State offensive line is stocked with potential NFL talent. Acrobatic receivers Chris Olave and Garrett Wilson will be primary targets. A highly touted quartet of freshman receivers could make an impact, too, and there is depth at running back.

“I’ll be shocked if he doesn’t have a Heisman-winning type of year,” ESPN college football analyst Kirk Herbstreit said. “And I hate to just put that on him, but I’m sure that’s what his own expectations are, for himself and for his team.”