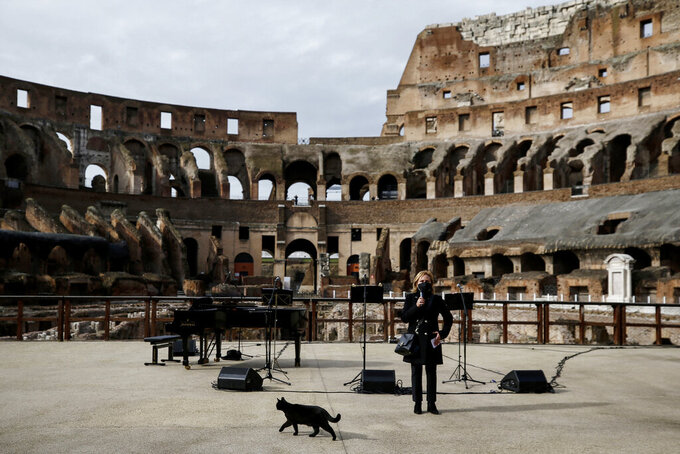 One of the famous Rome's cats passes by, as a concert for the reopening of ancient Colosseum is being presented Monday, Feb. 1, 2021, in a partial lifting of restriction measures aimed at containing the spread of COVID-19. Italy has eased its coronavirus restrictions Monday for most of the country downgrading Lazio and other regions from medium-risk orange zones to lower-risk yellow zones. (Cecilia Fabiano /LaPresse via AP)

ROME (AP) — Much of Italy gingerly reopened Monday from pre-Christmas coronavirus closures, with the Vatican Museums welcoming a trickle of visitors to the Sistine Chapel and locals ordering their cappuccinos at outdoor tables for the first time in weeks.

While many European countries remain in hard lockdowns amid surging COVID-19 infections and variants, five more Italian regions graduated to the coveted “yellow” category of risk starting Monday. That meant museums and the Colosseum could reopen, sit-down restaurant and bar service could resume during the day and many high schoolers could return to class part-time.

“Finally we can breathe again after this long period of staying at home,” waiter Elsafty Rashad said as he set up tables outside La Nonna Betta restaurant in Rome’s Ghetto neighborhood. “Without work, staying at home every day is too difficult for us young people who work, who have to pay rent and everything else.”

Italy is by no means out of the woods: The country is averaging around 12,000-15,000 new confirmed cases and 300-600 COVID-19 deaths each day. But it appears to have avoided the severe post-Christmas surges in Britain and elsewhere thanks to tightened restrictions over the holiday that kept ski slopes closed and prevented residents from traveling outside their regions for big family get-togethers.

Many travel restrictions remain in place, along with indoor and outdoor mask mandates, a 10 p.m. curfew, limits on public transport and other social-distancing norms aimed at preventing the health system from buckling under.

Tuscany, for example, was declared “yellow” last week and on Monday its famed Uffizi Gallery reported that around 7,300 visitors had already passed through its doors. Museum director Eike Schmidt said he hoped the government would allow the museum to reopen on weekends too even though for now, visitors are almost exclusively locals since interregional travel is still restricted.

In Rome, Monday's “yellow" designation meant that the Vatican Museums welcomed visitors for the first time in 88 days — its longest closure ever. Museum director Barbara Jatta said staff took advantage of the weekslong closure to rearrange some exhibit halls and do maintenance work that would otherwise be difficult to complete with the nearly 7 million visitors who normally flock to see Michelangelo’s “Last Judgment” and Raphael masterpieces each year.

“I think it was a once-in-a-lifetime opportunity to see it so empty,” marveled Julia Lammer, a visitor from Austria who said she had been in Rome for several weeks before being able to snap up a ticket online to see the Sistine Chapel on the first day it reopened.

Italy, the first country in the West to be hit by COVID-19, shuttered its museums in early November during the peak of its autumn resurgence and divided the country up into a three-tier zone of risk, with regions assigned the most severe restrictions (red) to the least (yellow) based on their infection rates and the health care system’s ability to respond.

Hardest-hit Lombardy was declared a “red zone” as it once again succumbed to high numbers of infections and dead. But even Lombardy graduated to “orange” on Monday, allowing shops to reopen and takeout service at restaurants and bars. Not all stores took advantage, though, with many still shuttered on a typically slow Monday morning.

In Rome, where the “yellow" designation and reopenings coincided with a hint of a spring day, residents were out taking full advantage.

“We couldn’t wait," said Giulia Marcelli as she soaked in the morning sun. “Look, the very first morning I am here with my papa getting a cappuccino, sitting at a table, outside.”

Nicole Winfield contributed to this report.