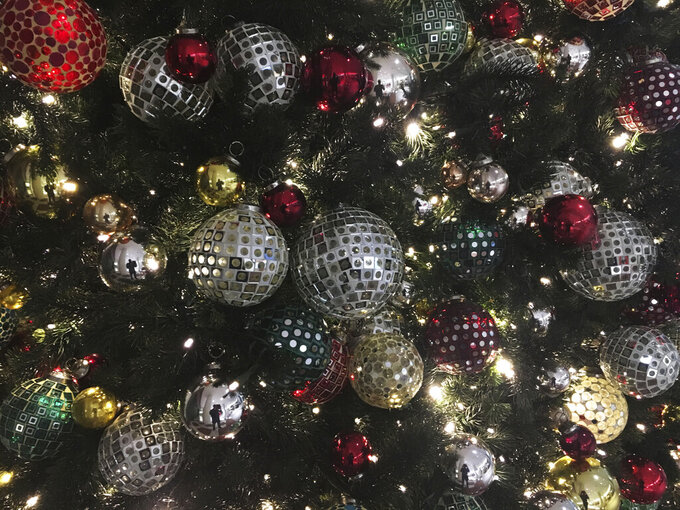 FILE - In this Friday, Dec. 1, 2017, file photo, ornaments hang on a Christmas tree on display in New York. Office holiday parties are tricky in 2020 amid the coronavirus pandemic. Dancing, drinking and fancy dinners are out. Many companies are foregoing parties altogether, deciding instead to send staff gift baskets, extra time off or donations to charities that employees choose. (AP Photo/Swayne B. Hall, File)

With dancing, drinking and fancy dinners a no-go because of virus concerns, companies are getting creative about their holiday office parties this year. The challenge is how to organize a virtual celebration that doesn't feel like yet another Zoom meeting.

Many are forgoing parties altogether and instead giving employees gift baskets, extra time off or donations to charities of their choice. Just 23% of companies were planning celebrations, down from 76% last year, in a survey of 189 companies by global outplacement firm Challenger, Gray & Christmas. Nearly three-quarters of parties this year will be virtual.

The companies going ahead found their pandemic-weary employees want some kind of bash to break up the anxiety and isolation permeating the holidays.

“People are itching to see each other in person, but I also don’t feel totally comfortable holding a typical dinner and open bar,” said John Ross, president of Test Prep Insight, a small online education company with 10 employees based in Sacramento, California. ”And I know some Zoom-style virtual party just won’t cut it.”

He landed on the idea of a snow day at a resort near Lake Tahoe, with sledding, snowshoeing and a snowman-building competition. There will be a catered lunch, but no alcohol. Oh, and no plus-ones.

Still, “people are thrilled it’s back on,” Ross said.

Demand has been high for off-the-wall virtual parties, said Jonathan Como, co-founder of Offsyte, a marketplace for corporate team events, which has organized online holiday events for companies including health insurance giant Blue Shield, the ride-hailing company Lyft, and the dating app Tinder.

Most popular are celebrations that involve sending food and drink to employees for online cocktail or chocolate-making classes, Como said. Also big are virtual escape rooms where employees can play games.

“It will likely be very silly because every employee will be given a character to play,” Roller said. "Truthfully, we almost didn’t have a company party. However, numerous people started asking about one, so we decided it was the least we could do.”

Many companies are using virtual celebrations to offer something people have missed throughout the pandemic: live entertainment.

On Site Opera, a New York City group that performs at non-traditional venues, got an unusual request to perform arias for a team of lawyers at a California firm. The numbers will include an aria from Carmen in which the title character tries to negotiate herself out of prison — a favorite of the late Justice Ruth Bader Ginsburg, who famously loved opera, said Artistic Director Eric Einhorn.

“It’s just a chance for the attendees to nerd out with us, to have a good time,” Einhorn said.

Some larger companies are spreading out events over several weeks and letting employees choose between ugly sweater contests, cooking lessons or pet costume competitions. Others are dividing celebrations up between teams.

A team of social media managers at PC maker Dell organized a Secret Santa gift exchange and a virtual show-and-tell for employees to share a meaningful memory or thing. The team is new and had only met in person once before the pandemic erupted in the spring.

“It’s been a wild year, and as a new team we had to work extra hard — and in new and different ways — to build community,” said Susie Gidseg, the team’s senior manager.

The caution in the private sector contrasts with the White House, which has been hosting a series of indoor holiday celebrations. With virus cases on the rise, the Centers for the Disease Control of Prevention has urged Americans to avoid large gatherings during the holidays, particularly indoors, where the virus spreads more easily.

President Donald Trump defended the parties in remarks to reporters Monday, saying the number of attendees have been reduced and that he has seen “a lot of people at the parties wearing masks.”

Secretary of State Mike Pompeo also caused an outcry after the Washington Post reported that he had invited hundreds of people to indoor parties hosted by him and his wife. The American Foreign Service Association, the union of U.S. diplomats, called on Pompeo to cancel the parties, voicing concern that State Department employees would be compelled to attend.

A statement released by the State Department said all events followed the department’s own “Diplomacy Strong” virus protocols. That included a mask requirement for all attendees and temperature checks at the entrances.

The statement noted that the sheer number of State Department events was partially a reflection of that diligence, as normally large events were being broken up in multiple smaller gatherings to limit the crowds.