South Africa OKs limited use of parasite drug for COVID-19 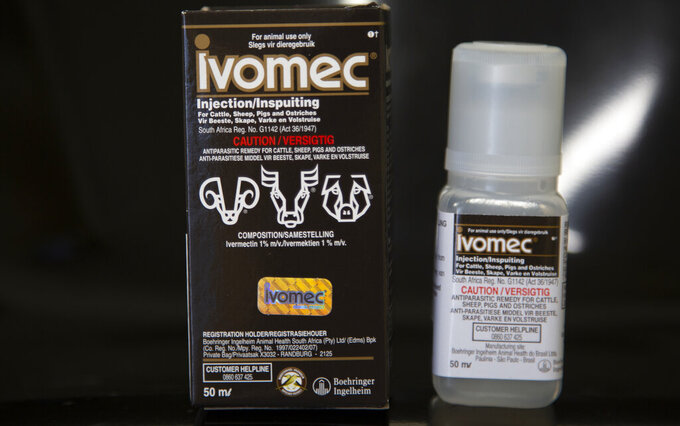 The packaging and a container of veterinary ivermectin is seen in Johannesburg, South Africa, Friday Jan. 29, 2021. South Africa is allowing the limited use of a medicine to treat COVID-19 even though regulators acknowledge there’s not enough evidence that it works or is safe for this purpose. The South African Health Products Regulatory Authority this week announced the drug ivermectin could be used in exceptional circumstances. Neighboring Zimbabwe also has apparently quietly allowed use of the drug.a. (AP Photo/Denis Farrell)

JOHANNESBURG (AP) — South Africa is allowing the limited use of a medicine to treat COVID-19 even though regulators acknowledge there’s not enough evidence that it works or is safe for this purpose.

The South African Health Products Regulatory Authority this week announced the drug ivermectin could be used in exceptional circumstances. Neighboring Zimbabwe also has apparently quietly allowed use of the drug.

Ivermectin has long been used elsewhere for parasites, and interest grew when a report suggested it might inhibit the coronavirus in a lab dish. But large, definitive experiments have not been done to establish whether it’s safe or effective for treating COVID-19.

The South African agency said it took the action in an effort “to curb the current widespread uncontrolled use of ivermectin” and meet doctors' appeals for access to the drug. In South Africa, the drug is only registered for use in animals to fight lice and worms. The agency said doctors were using the veterinary product or illegally imported versions for people.

“This widespread unregulated use of ivermectin has meant that the quality and content of the ivermectin being prescribed cannot be guaranteed,” the agency said in a statement.

The agency said it would allow “controlled and compassionate use” for COVID-19 and provide clear guidance on its use and monitoring. Its statement noted that other regulators haven't acted on the drug because of insufficient proof it helps COVID-19 patients.

“This doesn’t mean that our position has changed on the lack of availability of scientific data, but we had to, as a regulator, have very in-depth discussions around the context we find ourselves in with the pandemic,” said the agency’s chief Boitumelo Semete-Makokotlela.

In the United States, ivermectin is approved for treating some parasitic illnesses but not COVID-19. The Food and Drug Administration has warned against people taking the veterinary version of the drug.

Africa’s top health official has discouraged the use of ivermectin for COVID-19.

“They should not use it. They should be relying on resources that are tested through controlled, clinical trials,” Dr. John Nkengasong, director of the Africa Centers for Disease Control and Prevention, told the BBC.

He said reports that the drug is effective are “anecdotal reports and are not scientifically driven.”

South Africa’s University of the Free State recently announced that it is preparing to test ivermectin for COVID-19, and there are studies underway elsewhere.

"What we need are larger, better designed trials that we all hope would give us a home run,” said the South African agency’s board chairwoman Professor Helen Rees.

Early this year, officials raided a hospital in the city of Durban after a tip that a pharmacist there was dispensing ivermectin. In a separate incident, a man was arrested at Durban's airport after arriving from Dubai with 2,464 ivermectin tablets in his hand luggage.