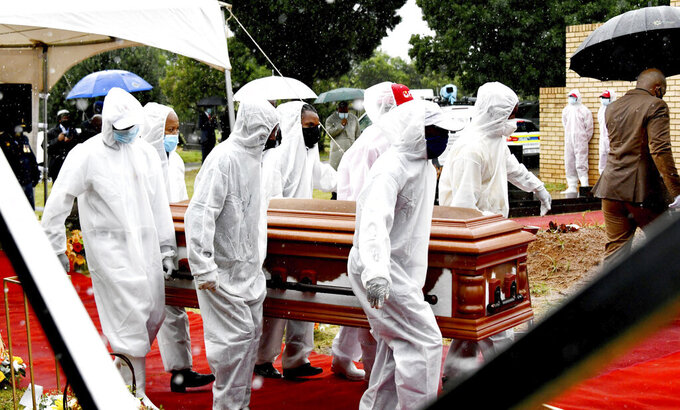 In this photo provided by the South African Government Communications and Information Services (GCIS) pallbearers carry the coffin in Witbank, South Africa, Sunday, Jan. 24, 2021, at the funeral of Cabinet minister Jackson Mthembu, who died of COVID-19 last week. Police are investigating the premier of the Mpumalanga province Refilwe Mtsweni-Tsipane for failing to wear a mask and for hugging a police officer at the public funeral. (Kopano Tlape/South African Government Communication and Information Services via AP)

South African police are investigating the premier of Mpumalanga province for failing to wear a mask at a public funeral.

Refilwe Mtsweni-Tsipane was seen on a live state television broadcast violating the country's COVID-19 regulations by not wearing a mask and hugging a police officer. She was attending the funeral of Cabinet minister Jackson Mthembu, who was buried Sunday after dying of COVID-19 last week.

Photos and video footage of Mtweni-Tsipane attending the burial without a mask have been widely circulated on social media, prompting many to criticize government officials for not barring her from entering the gravesite without a mask and not taking action against her.

South Africa requires masks to be worn in all public spaces and failure to do so is punishable by a fine or imprisonment for up to six months. Several hundred people have been arrested for not wearing masks, according to police reports.

Funerals have been limited to a maximum of 50 people, all of whom must wear masks at all times and keep a distance of 1.5 meters (5 feet) from each other.

“If South Africa wants to beat this invisible enemy which is COVID-19, we simply can’t let down our guard down," Cele said in a statement Monday.

Mtsweni-Tsipane has since issued an apology for the incident, but her statement added to the controversy as she claimed she was not aware that her mask had fallen off. Many people on social media questioned how that could be true.

South Africa is battling a resurgence of the COVID-19 that is driven by the 501Y.V2 variant identified in this country that is estimated to be about 50% more transmissible, according to scientists.

The country has recorded 8,147 new cases and 300 deaths in the last 24 hours. It has a cumulative total of more than 1.4 million cases, including 40,874 deaths from COVID-19. South Africa, with a population of 60 million people, has the continent's highest levels of confirmed cases of the disease, accounting for more than 40% of the reported cases of all the 54 countries of Africa, with a total population of 1.3 billion.