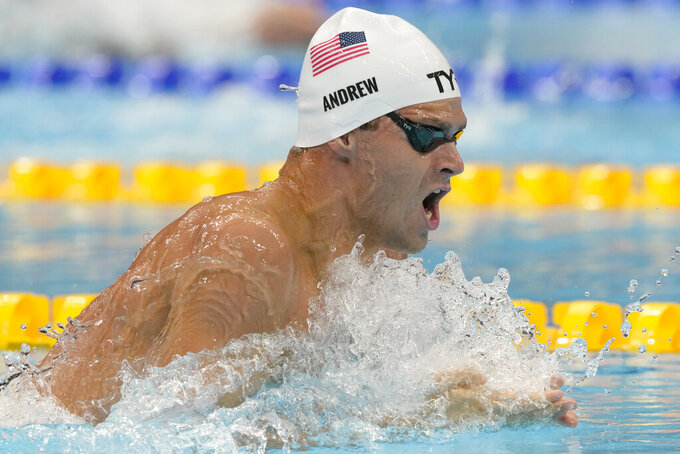 Michael Andrew of the the United States swims in a heat of the men's 200-meter individual medley at the 2020 Summer Olympics, Wednesday, July 28, 2021, in Tokyo, Japan. (AP Photo/Martin Meissner)

TOKYO (AP) — Tatjana Schoenmaker of South Africa flirted with the world record in the 200-meter breaststroke preliminaries on Wednesday night in the Olympic pool.

She clocked 2 minutes, 19.16 seconds — just 0.05 off the world mark of 2:19.11 set by Rikke Pedersen of Denmark at the 2013 world championships. There has been just one world record set at these Olympics, by Australia in the women's 4x100 freestyle relay.

Emma McKeon of Australia topped the 100 freestyle heats in 52.13 seconds. Siobhan Haughey of Hong Kong, silver medalist in the 200 free earlier Wednesday, was second at 52.70.

Among the other big names advancing to the semifinals were Cate Campbell of Australia, Sarah Sjostrom of Sweden, Penny Oleksiak of Canada and American Abbey Weitzeil.

American Erika Brown scraped into the next round by winning a swim-off for the 16th and last spot. The two swimmers who tied for 16th — Marie Wattel of France and Ranomi Kromowidjojo of the Netherlands — both declined to participate in the swim-off.

Brown and Wu Qingfeng of China had tied for 18th, and Brown won the swim-off.

American Michael Andrew qualified fastest in the 200 individual medley in 1:56.40. Also moving on was his teammate Chase Kalisz, the 400 IM winner. László Cseh of Hungary, a two-time medalist in the event, qualified 10th-quickest at age 35.

American Ryan Murphy, the defending Olympic champion who was third in the 100 back, advanced in seventh.