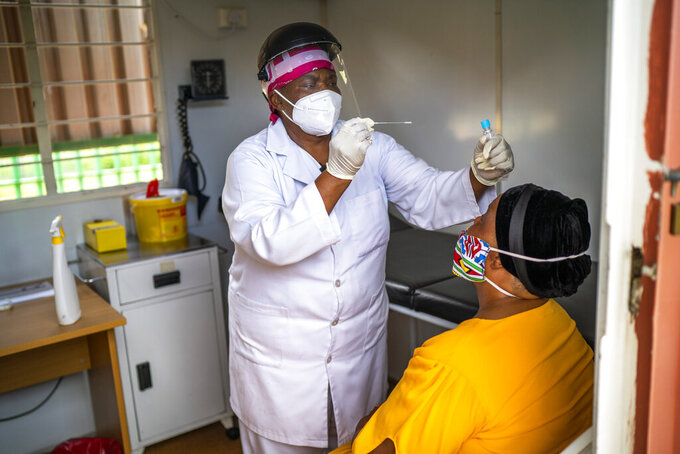 Putseltso Lesofe, gives a patient a COVID-19 test at the Ndlovu clinic in Elandsdoorn, 200 kms north-east of Johannesburg Thursday Feb. 11, 2021. The Ndlovu center is running a study of the Johnson & Johnson COVID-19 vaccine with 602 people from the community participating. (AP Photo/Jerome Delay)

“So many people, I test them and within days they have passed away,” said Masango. “I want protection.”

C.J. Umunnakwe, a virologist running a lab that has performed more than 40,000 virus tests, says he “wholeheartedly believes in vaccinations. Vaccines save lives.” He plans to talk to those who may be skeptical.

Health care workers at the Ndlovu Care Group in rural northeastern South Africa are eagerly awaiting the first jabs of the Johnson & Johnson vaccine, which will be given out to medical staff starting this week.

That's despite the fact that the one-shot Johnson & Johnson vaccine — unlike the two-shot Pfizer-BioNTech, Moderna and Oxford-AstraZeneca vaccines — has not been approved for general use anywhere in the world.

No matter, say many South African health workers who are enthusiastic about getting the J&J jab, which comes amid a huge shift in the government's vaccination strategy.

South Africa, with nearly 1.5 million confirmed cases of COVID-19 including more than 47,000 deaths, has had 41% of Africa's reported cases.

Last week South Africa controversially decided to drop the AstraZeneca vaccine — which had been already purchased, delivered and approved in the country -- from the first phase in which 1.25 million health care workers will be vaccinated.

The last-minute decision was made after a small test showed the AstraZeneca vaccine offered minimal protection against mild to moderate cases of the variant dominant in South Africa. Although preliminary and not peer-reviewed, the results raised serious questions about how effective the AstraZeneca vaccine would be specifically in South Africa, even though the vaccine has been approved in over 50 other countries around the world.

Health officials decided to change to the Johnson & Johnson vaccine, which tests show is safe and effective against the variant here. A one-shot vaccine is also easier for many countries to implement.

“The switch has emboldened the skeptics, who say the vaccines have problems,” Umunnakwe said of those who alleged that big pharmaceutical firms are using Africans as guinea pigs.

“I am telling people that the change shows that decisions are being made transparently, that it was driven by science,” he said. “It is proof that we are putting the public as first priority.”

South Africa has purchased 9 million doses of the Johnson & Johnson vaccine and 80,000 will be delivered this week to kick off the inoculation campaign, the president says. South Africa’s regulatory body has approved the J&J shot for testing purposes. Until that vaccine receives full approval, it will be given as part of an “implemented study,” officials say.

At the Ndlovu Care Group, in the small town of Elandsdoorn in Limpopo province, 200 kilometers (124 miles) north of Johannesburg, medical workers have seen the devastation wrought by the virus up close. When COVID-19 hit, the center quickly ramped up its laboratory to do PCR tests.

The protective gear that cloaks Masango cannot hide her empathy as she welcomes people who come for a COVID-19 test.

“I'm so skilled at this, you won't even feel it!” she said to a visitor.

Masango, 56, said she has tested more people than she can count.

“What depresses me the most is when I must tell someone that they are positive,” she said. “They are so frightened ... Grandparents die. Breadwinners die. How will their children get food?”

The prospect of getting vaccinated excites her.

The Ndlovu Care Group has done more than 40,000 tests in the rural community, including workers at large mines and commercial farms. More than 20,000 of those tests were in January alone, when South Africa was hit by a dramatic resurgence of the disease, driven by the more contagious variant that is now dominant.

The Ndlovu laboratory can carry out the PCR virus tests and get the results within hours. In the January resurgence, it was averaging about 1,600 tests per day.

“We were busy, very busy,” said Umunnakwe, a 35-year-old virologist who came to the center to study HIV and is now studying coronavirus too. He is keenly watching the genomic sequencing in South Africa that identified the new variant.

“By doing sequencing, we don't just see what is present in the virus today, we can detect what may happen in the future,” said Umunnakwe, adding that he hoped Ndlovu will get the equipment to do sequencing, rare for a rural health center.

Most South Africans are looking forward to getting vaccinated. An impressive 67% of adults said they would definitely or probably take a vaccine, according to a survey by the University of Johannesburg and the Human Sciences Research Council.

Dr. Rebone Maboa, who is running a study of the J&J vaccine at the Ndlovu center, was excited to hear that it will be used in South Africa.

“I'm actually ecstatic!” said Maboa. “I think it's actually a better vaccine for us here in South Africa, looking at our variant.”

The 42-year-old doctor said 602 people in the community are participating in the test and half were injected with the J&J vaccine in November. She also said her recent recovery from COVID-19 makes her a stronger advocate for getting vaccinated.

“Lack of knowledge makes people much, much more anxious," said Maboa. "Those who get the vaccine will be role models, vaccine ambassadors who will encourage others.”