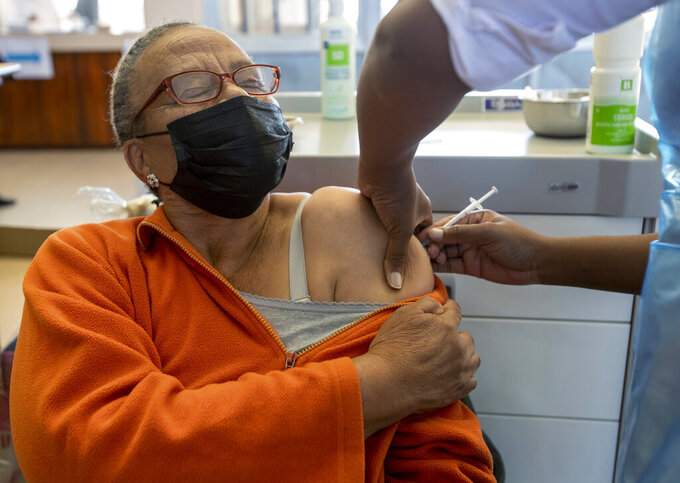 Thoko Hlongwane, receives the first dose of Pfizer COVID-19 vaccine from a health staff member during a vaccination day at a vaccination centre at Chris Hani Baragwanath Academic Hospital in Soweto, South Africa, Monday, May 17, 2021. South Africa has started its mass vaccination drive with the goal of inoculating nearly 5 million citizens aged 60 and above by the end of June. (AP Photo/Themba Hadebe)

“All my life I have tried to do the right thing and, today, getting vaccinated against COVID-19 is definitely the right thing to do,” said Tutu, the former Anglican archbishop of Cape Town who won the Nobel Prize Prize in 1984 for his peaceful work to end apartheid, South Africa's previous regime of racist rule by the country's white minority.

Tutu was rolled in a wheelchair into a vaccination center in Cape Town where he and his wife, Leah, were among those getting shots.

“It was wonderful to get out of the house and meet these dedicated healthcare workers who gave us our vaccines," said Tutu in a statement. “To all of you on the frontlines who have been working to keep us safe for more than a year now, I salute you.”

South Africa has said it intends to inoculate nearly 5 million citizens aged 60 and above by the end of June.

Shots of the Pfizer vaccine were given to South Africans in a few nursing homes and to a few thousand people aged 60 and older on Monday to start the campaign.

The health department said it plans to give shots to more than 7,700 senior citizens at 102 nursing homes by the end of the week, with a total 50,000 in those facilities to get their first jabs by the end of May.

So far the country has inoculated just over 478,000 of its health care workers with Johnson & Johnson vaccines and it plans to give the shots to the remainder of its 1.2 million health workers by the end of this week.

South Africa now has nearly 1 million doses of the Pfizer vaccine, after receiving a delivery of 325,260 doses of the vaccine on Sunday night.

“The Pfizer vaccines are safe and work well, even against the variant that is dominant in this country,” Health Minister Zweli Mkhize said Sunday night in a speech that was broadcast nationally.

By the end of June, the country expects to have received 4.5 million Pfizer doses and 2 million of the Johnson & Johnson vaccine, Mkhize said.

South Africa's vaccination drive comes as the country is seeing a rise in cases of COVID-19 and experts warn of a resurgence as the country approaches the colder months of the Southern Hemisphere’s winter.

South Africa has been the country hardest hit by the pandemic in Africa with more than 1.6 million confirmed infections and more than 55,000 reported deaths.

South Africa’s rollout of the vaccine has faced serious delays, including the return of 1 million AstraZeneca doses that were found to provide only minimal protection against the COVID-19 variant dominant in the country.

It also temporarily halted giving the Johnson & Johnson vaccines to health care workers after the U.S. Food and Drug Administration flagged rare blood clots in some patients who had received the vaccine.

Mkhize has warned that those who have been vaccinated should continue to practice standard prevention measures like wearing masks and social distancing.

“The vaccine will protect you from getting severe COVID disease or dying from COVID. However, no vaccine works 100% and we also still do not know whether vaccination prevents transmission of the virus," Mkhize said. “It is therefore still important to follow the standard COVID-19 safety precautions to protect yourself and those around you.”