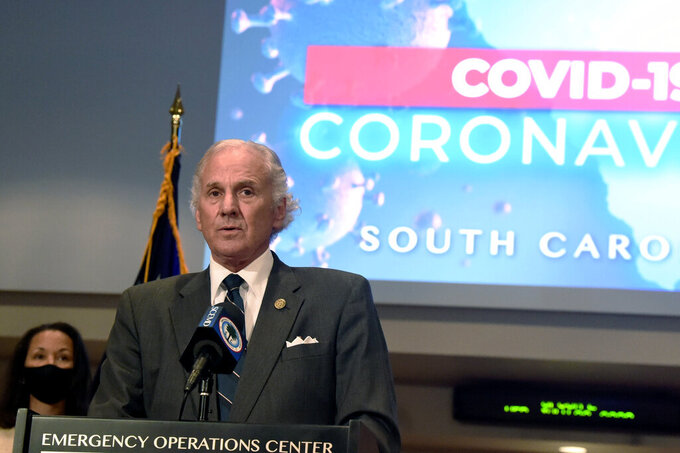 FILE - In this July 29, 2020 file photo, South Carolina Gov. Henry McMaster speaks during a COVID-19 briefing as state epidemiologist Linda Bell, left, looks on, in West Columbia, S.C. McMaster ended South Carolina’s ongoing pandemic-related state of emergency on Monday, June 7, 2021. The Republican said during a news conference that the coronavirus situation in the state had improved to the point that it was no longer necessary. (AP Photo/Meg Kinnard, File)

COLUMBIA,S.C. (AP) — Gov. Henry McMaster brought an end to South Carolina's pandemic-related state of emergency on Monday, saying the coronavirus situation in the state had improved to the point that it was no longer needed.

“It is no longer necessary for us to have a state of emergency,” McMaster said during a news conference. “We need to proceed on the course that we have set out, and be careful.”

McMaster has issued 30 separate emergency declarations throughout the pandemic, creating a mechanism though which he could put forth a plethora of accompanying executive orders allowing him to set temporary policies aimed at reining in the spread of COVID-19.

Some of those orders have at times put the governor at odds with state agency heads. In May, when McMaster issued an order allowing parents to opt their children out of wearing masks in public schools, state Superintendent Molly Spearman, a fellow Republican, said the governor was "inciting hysteria” and had no legal basis for his decision.

McMaster never used his powers to implement a comprehensive statewide mask rule, instead calling on South Carolinians to show personal responsibility in practicing social distancing and other public health guidelines. He did order, and has since rescinded, several specific statewide orders that required masks in state government buildings and restaurants.

State law only allows the governor to issue an emergency declaration for 15 days before requiring involvement from state lawmakers, a construct created in a time when people thought more of hurricanes and less about pandemics and modern governments that require continuity and quick reactions. To get around that, McMaster issued a total of 30 separate declarations during the pandemic, sometimes making only incremental changes.

The governor has said his goal wasn’t to avoid legislative oversight, but to keep the government operating in the pandemic because he couldn’t wait for lawmakers to meet when they were trying to stay apart.

This year, both the South Carolina House and Senate discussed proposals to limit how long the governor can declare a state of emergency without their input — an idea McMaster supported — but they couldn’t agree on a bill before the session ended last month.

On May 11, two days before the General Assembly's last regular day, Senate Majority Leader Shane Massey put up one last proposal to end what he called “the perpetual state of emergency we find ourselves in," saying state agencies took advantage of the emergency declarations to extend their power without oversight from lawmakers.

“They are doing more and more things on their own without any legislative input," the Edgefield Republican said. "This isn’t just about the governor quite frankly. It’s about what he is allowing the agencies to get away with without legislative purview.”

That measure died on the vine as the session ended.

"We probably need to clarify the way these states of emergency are issued," McMaster said Monday.

As of Saturday, about 1.6 million South Carolinians had completed the coronavirus vaccination process, or about 38% of the eligible population, according to public health officials. More than 1.9 million had gotten at least one vaccine, or about 45% of those eligible.

Jeffrey Collins contributed to this report.