South Carolina remains No. 1 in women's AP Top 25; Texas in 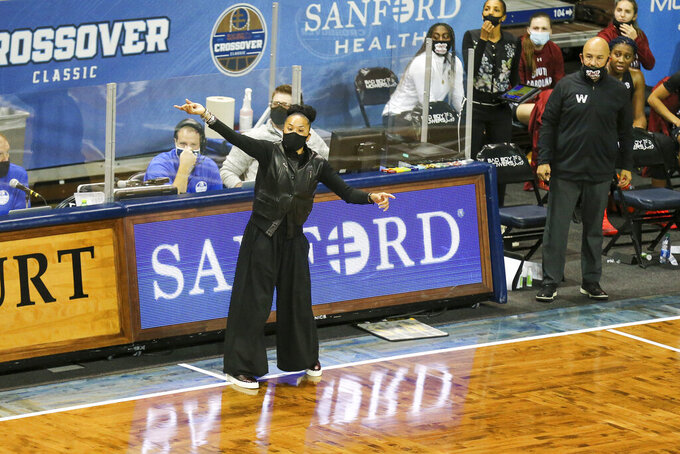 South Carolina head coach Dawn Staley yells at her team during the first half of an NCAA college basketball game against Gonzaga on Sunday, Nov. 29, 2020, in Sioux Falls, S.D. (AP Photo/Josh Jurgens)

NEW YORK (AP) — Top-ranked South Carolina jumped into the new season by playing three games in the first five days. The Gamecocks were challenged over the weekend in a tournament in South Dakota but emerged victorious.

They remained the top choice in The Associated Press women's basketball poll released Monday, receiving 29 of 30 first-place votes from a media panel. The top 10 teams stayed the same as in the preseason poll, with Stanford, UConn, Baylor and Louisville rounding out the first five.

South Carolina opened with an 81-point victory over Charleston before topping South Dakota by 10 and then-No. 21 Gonzaga by seven.

“I don’t think a whole lot of teams would come out of here undefeated with the talent that was here,” Gamecocks coach Dawn Staley said. “Those were challenging opponents. Challenging. Some people won’t play teams like this because you’re susceptible to losing. It was good that this core group of players found their edge.”

Stanford won its first game, moving coach Tara VanDerveer three wins behind Pat Summitt's total of 1,098 victories. It might be a while before the Cardinal play again; Santa Clara County on Saturday announced new COVID-19 rules that include a three-week ban starting Monday on practices and games for contact sports. The Cardinal's game against San Diego that was scheduled for Monday was canceled.

UConn also was waiting to get its season started after the Huskies were put on pause because of a positive coronavirus test in their Tier I group.

Texas, under new coach Vic Schaefer, won its first two games and entered the poll at No. 25 for its first ranking since last December. Notre Dame fell out.

Here are other tidbits from the women's Top 25:

MOVERS AND SHAKERS: Iowa State had the biggest drop in the poll, falling eight spots to No. 23 after splitting a pair of games. The Cyclones beat Omaha by 26 points to open the season before falling to South Dakota State 76-69. The team was missing coach Bill Fennelly, who is in quarantine after an exposure to COVID-19. He'll miss games this week against TCU and South Carolina. No. 13 Indiana, No. 18 Gonzaga and No. 21 Missouri State all rose three places in the poll.

COMING UP COLLIER: Charli Collier had a stellar game for newly ranked Texas, scoring 44 points in Sunday's win over North Texas. It was the highest single-game scoring total for a Texas player since 1994 and the fourth-highest total in school history.

She made 14 of her 17 shots from the field and was 14 of 15 from the free-throw line. Add 16 rebounds and two blocks, and it was a complete effort.

“My mindset was just being confident and dominate the paint, which is what I did today,” Collier said. “Our base offense is in the paint, so that’s where I live.”

She missed last season to undergo chemotherapy and then had a double mastectomy last November.

The native of Australia had 16 points, seven rebounds, four steals and three assists for then-No. 23 Orange. Mangakahia, the school’s all-time assist leader, got involved quickly with a pass to Amaya Finklea-Guity for a layup to open the scoring. A few minutes later, Mangakahia got a steal and scored her first points in almost two years on a fast-break layup.

“There was a lot going through my mind,” Mangakahia said after the 50-39 victory over Stony Brook. “Especially on the bus. In the warmups, there was less emotions because I was just focused. But on the bus, I was very emotional and I just couldn’t believe that this day was here and I was going to be able to play.”

CORONAVIRUS COUNT: Over the first five days of the season, 69 games were either canceled or postponed because of COVID-19. No. 3 UConn and 15th-ranked Northwestern are still waiting to get their seasons started.

GAME OF THE WEEK: South Carolina hosts No. 8 N.C. State on Thursday in an early season showdown.