Spain begins trial for killings of 5 Jesuits in El Salvador 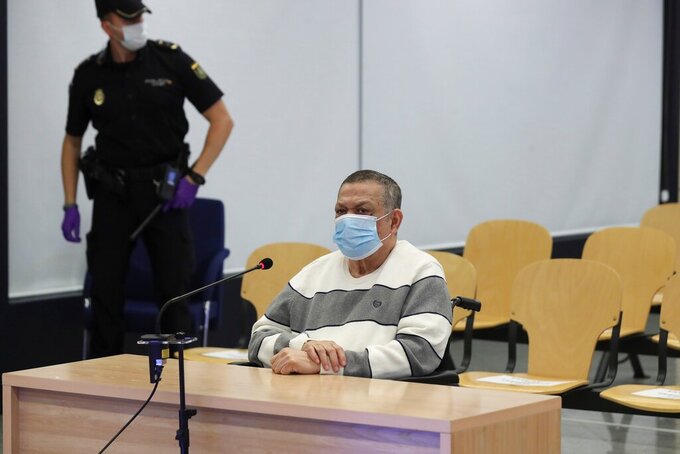 Inocente Orlando Montano attends a trial in Madrid, Spain, Monday June 8 2020. Spain's National Court on Monday started the trial of two former Salvadoran military men for their alleged involvement in the massacre of five Spanish priests in El Salvador more than three decades ago. Orlando Montano, a former colonel who served as El Salvador's vice minister for public security during the country's 1979-1992 civil war, faces up to 150 years of imprisonment for the slays in 1989. (Kiko Huesca, EFE/Pool Photo via AP)

MADRID (AP) — Spain’s National Court on Monday kicked off the trial of two former Salvadoran military men for their alleged involvement in the massacre of five Spanish priests in El Salvador more than three decades ago.

Inocente Orlando Montano, a former colonel who served as El Salvador’s vice minister for public security during the country’s 1979-1992 civil war, faces up to 150 years of imprisonment for the slayings in 1989.

The United States extradited Montano to Spain in 2017 to face charges of terrorist murder and crimes against humanity.

Montano, who is in his 70s and in frail health, is set to testify later this week.

Prosecutors have also asked for five years of imprisonment — one for each of the killings — for René Yusshy Mendoza, an army lieutenant and member of the Atlacatl battalion that allegedly killed the priests at the Central American University in San Salvador.

Mendoza has confessed to the crime. During Monday’s opening session of the trial in Madrid, his lawyer argued that Mendoza should be excluded from the case under the statute of limitations.

Both defendants allegedly took part in the “decision, design or execution” of the murders, according to the prosecutor’s account seen by The Associated Press.

They are so far the only ones to face charges in Spain after El Salvador refused to extradite 16 other suspects who had been charged in the case.

Father Ignacio Ellacuría was the dean of the Central American University and a prominent mind behind so-called Liberation theology, a socially minded school of thought that spread among the clergy in the 1960s, especially in Latin America. He and the other Jesuit priests who died were helping organize peace talks to end the war.

Another priest from El Salvador, their housekeeper and her daughter were also killed in the Nov. 16, 1989, attack on the university. The Spanish court is not trying the defendants for those killings.

Outrage over the massacre prompted a U.S. congressional investigation which found that members of the force that killed the priests had received training from the U.S. military.

The long-expected trial date had been set before the coronavirus pandemic brought to a minimum the courtroom proceedings in Spain. It’s set to finish on July 16.

In previous hearings ahead of the trial Montano had rejected his role in the killings.