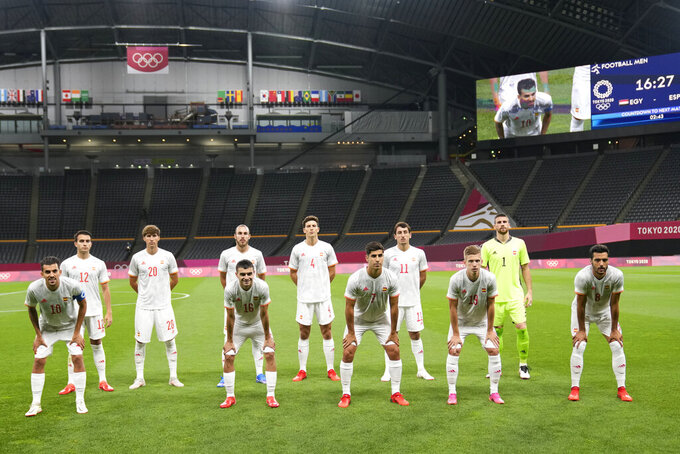 Players of Spain pose for the group photo keeping social distance prior to a men's soccer match against Egypt at the 2020 Summer Olympics, Thursday, July 22, 2021, in Sapporo, Japan. (AP Photo/SIlvia Izquierdo)

SAPPORO, Japan (AP) — Starting with six players who rushed from the European Championship to the Olympics, Spain was held to a 0-0 draw by Egypt on Thursday in the team's opening match of the men's soccer tournament.

Spain's best chance to score at the Sapporo Dome came when Dani Ceballos hit the post. The 24-year-old Real Madrid midfielder, who got injured at the end of the first half and had to be taken out, is one of three overage players permitted in the squad.

The players in the starting lineup who were also part of Spain's run to the Euro 2020 semifinals two weeks ago were goalkeeper Unai Simón, defenders Eric García and Pau Torres, midfielder Pedro, and forwards Dani Olmo and Mikel Oyarzabal.

Egypt picked players from domestic clubs except Saudi-based Ahmed Hegazi, the team's captain. Liverpool would not release striker Mohamed Salah for the Olympics with the Premier League season starting in three weeks.