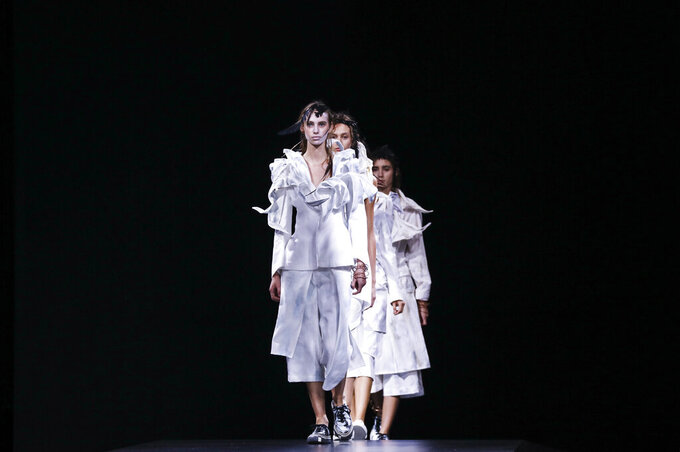 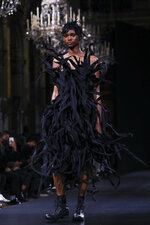 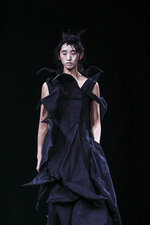 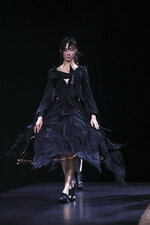 PARIS (AP) — From escapism at the disco, to resistance and aggression, even to pondering the importance of the postal service while working from home, designers in Paris have presented divergent creative responses to the global health crisis as spring-summer shows continued Friday.

Like Milan before it, Paris is undertaking an unusual fashion season for spring-summer 2021 because of the coronavirus pandemic.

For its nine-day duration, the calendar is flitting between 16 in-person, ready-to-wear runway collections, with masked guests, celebrities and editors in seated rows, around 20 in-person presentations, and several dozen completely digital shows streamed online with promotional videos.

Some of the show's highlights:

The starting point of the latest collection from the Japanese house famed for its techo-fabrics came as the designer was staring one day at a sea of boxes and contemplating the sheer amount of clothing due to be shipped to Paris from his native country.

There Satoshi Kondo had what the house called an “epiphany” about a design idea — making a whole display so compact that it could fit into one box — by tying, rolling, folding, stacking, and layering garments.

“I was inspired by the idea of delivering garments in compact forms to people all around the world and by doing so sharing the wonder and joy of unpacking them,” Kondo told The Associated Press in an email.

Kondo said in particular the situation surrounding the coronavirus pandemic, during which many people are working from home and relying on mail, also inspired him to explore this theme.

“As my team and I found ourselves working from home, I started to explore the idea of how a garment can be packed or unpacked,” Kondo added.

The collection was titled “unpack the compact.”

Lightweight black, white coffee and iceberg vests were made up molding fabrics into a soft shell — so that there were no seams. A loose cadmium orange dress was the strongest piece in a series of garments made of interlocking pieces of fabric that are held together thanks to zippers. On one biker jacket in that series, the wearer can play around with the zippers to create a different form.

“The garments I have created for this collection allow our perspectives to change, creating a multidimensional experience when realizing that the compact abstractions can be worn,” Kondo said.

After delays because of the COVID-19 crisis, Paris fashion museum the Palais Galliera has finally reopened following about two years of construction and renovation work to coincide with Paris Fashion Week.

The opening exhibition appropriately is a retrospective dedicated to the pioneering Parisian designer Gabrielle “Coco” Chanel who died in 1971. The exhibit moves from the start of her career, featuring key garments such as an iconic 1916 striped jersey, all the way to the LBD of the 1920s and the pre-World War II period.

The designer’s life came at a consequential moment in Europe, as war nearly shuttered her fashion house. Perfume and accessories were for a period the only surviving lines sold at 31 rue Cambon in Paris. Chanel thus made her name as much in perfume as couture, and the enduring No. 5 fragrance — created in 1921 and immortalized by Marilyn Monroe — is given an entire room. The exhibit runs until March 14.

The fun, girly looks — such minishorts revealing inches of legs, a one-shouldered skintight purple glitter dress and a pair of shimmering high-waisted lamé culottes in brilliant lavender — didn’t seem to reference the resistance and aggression seen by other designers responding to the uncertain times.

At this house, Marant said that her response was “a burning desire to go out, dance and escape.” The large leather cowboy style boots channeled the decade of excess — but this collection imitated that era’s styles, more than innovating its own.

All eyes are on Olivier Theyskens, the former Rochas designer, after he was tapped as artistic director of couture house Azzaro earlier this year.

In his eponymous lines, the French-Belgian designer has been associated with the romantic and couture-infused aesthetic of the early to mid-twentieth century. In Friday’s presentation, the finesse and couture was turned fully up.

A silken champagne-colored gown had 1940’s cross-over lapels and delicate ruching at the midriff. A pair of taupe gray wide-leg pants was made of shimmering material and fell sumptuously owing to a series of vertical knife pleats.