Spencer Torkelson has shown Tigers why they took him No. 1 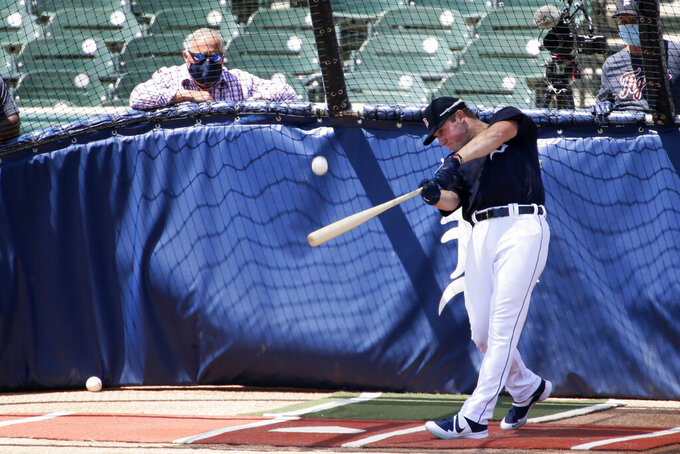 DETROIT (AP) — Spencer Torkelson has quickly showed the Detroit Tigers why they drafted him No. 1 overall this year and gave him a $8-plus million signing bonus to get in uniform for training camp.

Torkelson put his power on full display during his first batting practice.

“His first couple of rounds of batting practice have been pretty impressive," Tigers manager Ron Gardenhire acknowledged Monday. “He could definitely do some things. You see why a guy goes number one — right away."

Torkelson signed a minor league contract and is not expected to play in the majors during the pandemic-shortened season. Teams often are reluctant to put their top prospects in the majors until they’re fully ready to avoid starting the clock on how much time they have them under control contractually.

Gardenhire, though, did not want to rule out Torkelson playing in Detroit this season perhaps in part to not dampen his spirits.

“I’m not going to say, `No, he won’t make it to the big leagues this year,′ or anything like that," Gardenhire said. “We’re just happy to have him in this organization, in this camp, where we get eyes on him. We’ll see how it all plays out here as we go. You don’t want to rush this kid too quick.

“And, this is one of those years it’s a little bit different, but him being around all these major league guys is going to help.”

The Tigers put Torkelson in their player pool for the abbreviated season.

Tigers slugger Miguel Cabrera has already let Torkelson loud and clear that he wants him in the team's major league clubhouse.

“Miggy told him we need him," left-hander Matthew Boyd said.

Torkelson appreciated the gesture from Cabrera, who like the rest of the team, has warmly welcomed the highly touted prospect.

“It’s really cool to have guys like that backing you up," Torkelson said.

Undrafted out of high school, Torkelson hit 54 home runs at Arizona State. He finished two shy of the school record set by Bob Horner, who was drafted No. 1 overall in 1978.

The Tigers plan to convert Torkelson from first to third base and one of their former greats, shortstop Alan Trammell, is working with him as a special assistant to the general manager during camp.

The 20-year-old Californian acknowledged he really wasn't sure who Trammell was initially, but his father filled him in.

“He’s like, `You know who you’re talking to, right?’'' Torkelson recalled his father asking. “I’m like, `Yeah, I follow baseball and all, but I don’t know the name.' And he’s like, ‘He’s a Hall of Fame shortstop.’

“I guess it was good that I didn’t know that before I started talking to him because I would’ve got a little intimidated."

The dimensions of spacious Comerica Park, which has a 420-foot marker in center, have not done anything to diminish Torkelson's confidence. When he was on the field for the first time last weekend and looked around, doubt didn't set in.

The hype his hitting has generated also has not gotten to his head.

“I don't worry about it too much," Torkelson said. “At the end of the day, it's playing baseball. See ball. Hit ball."