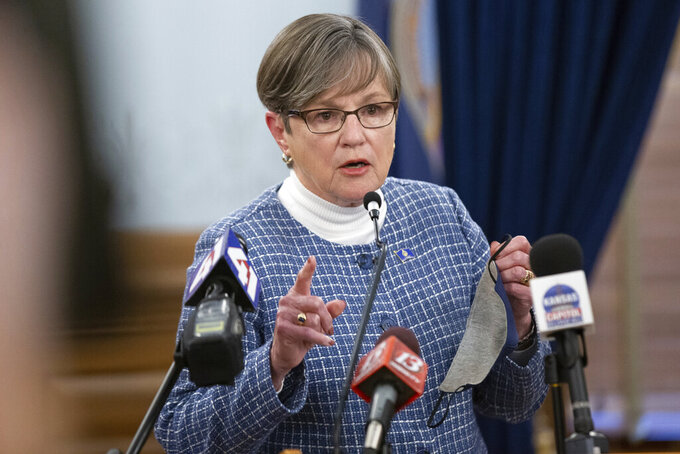 Gov. Laura Kelly gives a final remark regarding vaccine deliveries in Kansas during a press conference Monday, Dec. 14, 2020, in Topeka, Kan., where she announced David Toland, secretary of commerce, as the next lieutenant governor. (Evert Nelson/The Topeka Capital-Journal via AP)

Toland was the treasurer for Kelly's 2018 campaign for governor and is highly regarded by some business leaders. Naming Toland lieutenant governor could position him for a future run for governor and prompted speculation that Kelly might not run again.

Kelly ducked the question when she announced Toland's appointment Monday, saying she is focused on the coronavirus pandemic and the Legislature's 90-day session convening in January.

But the Sunflower State Journal reported that Kelly said during a virtual fundraising event Thursday evening that she would seek another term.

In an emailed statement to The AP, Fitzgerald said: “Governor Kelly is focused on the state’s response to COVID-19 and continuing Kansas’ economic recovery, but of course she is running for reelection.”