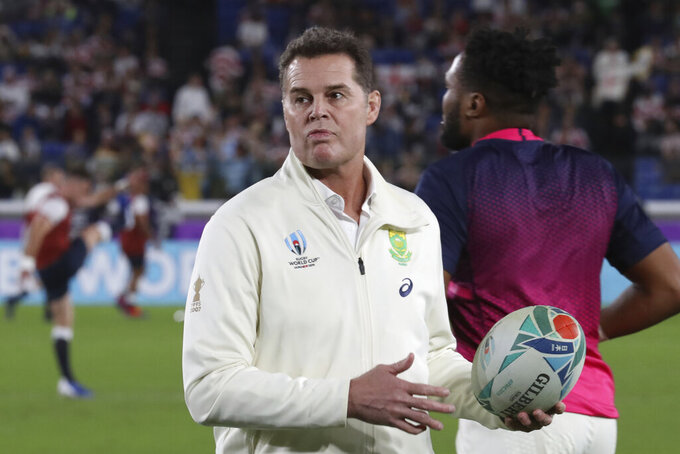 FILE - In this Saturday, Nov. 2, 2019 file photo, Rassie Erasmus looks on ahead of South Africa's Rugby World Cup final against England at International Yokohama Stadium in Yokohama, Japan. South Africa director of rugby Rassie Erasmus says he is open to the Springboks’ series against the British and Irish Lions being played in the UK and Ireland if that ensures it’s not canceled. Erasmus on Monday, Jan. 18, 2021 said the Springboks “will go to option Z” to make the three-test series happen amid the coronavirus pandemic. (AP Photo/Eugene Hoshiko, file)

CAPE TOWN, South Africa (AP) — South Africa director of rugby Rassie Erasmus is open to the Springboks' series against the British and Irish Lions being played away if that ensures it's not canceled.

Erasmus said Monday the Springboks “will go to option Z” to make the three-test series happen amid the coronavirus pandemic. He stressed, though, it would be the senior leadership of South African rugby and the Lions organization who make the final decision on whether the series in July and August goes ahead as planned in South Africa, is played elsewhere, or is postponed.

South Africa's 2019 Rugby World Cup-winning coach also revealed he, his wife and his children had recently contracted COVID-19. They had all recovered, Erasmus said, after he and his wife were “in a bad shape” for 5-6 days.

Erasmus' comments on this year's scheduled Lions tour were the first significant reaction from South Africa after reports emerged that a contingency plan was being considered that would have the Springboks traveling instead of the Lions, and the tests being played in Dublin, Cardiff and London instead of Johannesburg and Cape Town.

South Africa is in the grip of a second wave of the virus that has been described by the country's president and health authorities as worse than the first.

With a vaccination program underway in Britain, there is a realistic prospect of having crowds at games there by the summer, even if numbers are limited.

No fans would make the tour financially unviable for South Africa, with host countries relying on match ticket income and tens of thousands of Lions fans traveling for the series. The Lions, made up of players from England, Ireland, Scotland and Wales, tour once every four years and visit South Africa, Australia and New Zealand on a rotational basis. That means the opportunity to host a Lions series only comes around once every 12 years for each country.

A final decision on this tour is expected to be taken in mid-February, with talks ongoing between rugby officials and various government departments and broadcast partners, the Lions have said.

South African rugby is relying on a profitable Lions series to pull it out of deep financial trouble because of the pandemic. The Springboks haven't played a test since winning the World Cup in Japan in November 2019. They pulled out of last year's Rugby Championship because players had been sidelined for more than six months by the pandemic and were not ready to play.

Erasmus said the Springboks had “sacrificed” the Rugby Championship to give its players time to be ready for the Lions series.