Springboks to stick with Rugby Championship and SANZAAR 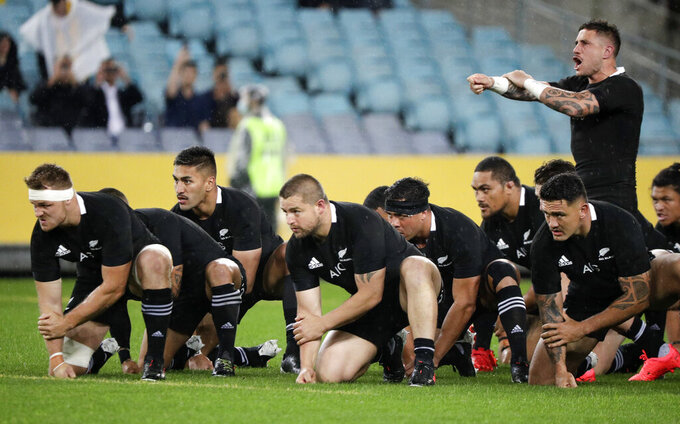 New Zealand's T.J. Perenara leads the haka during the Bledisloe rugby test between the All Blacks and the Wallabies at Stadium Australia, Sydney, Australia, Saturday, Oct. 31, 2020. (AP Photo/Rick Rycroft) 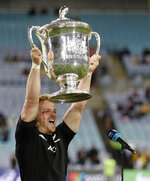 WELLINGTON, New Zealand (AP) — World Cup champion South Africa will remain part of the four-nation SANZAAR rugby alliance for the immediate future, defying speculation it would throw in its lot with the northern hemisphere.

The Springboks withdrew from this year’s tournament in Australia because of player welfare concerns after the COVID-19 pandemic prematurely ended the Super Rugby tournament and then delayed its domestic competitions.

In a statement Wednesday, SANZAAR said South Africa will rejoin the southern hemisphere's peak rugby tournament from next season. SANZAAR indicated there will be significant changes to its competitions, including Super Rugby, as it adjusts to the new world order created by the coronavirus pandemic.

“The southern hemisphere rugby powers have recognized the need for change in these difficult times and have committed to an international rugby future through to 2030,” SANZAAR chief executive Andy Marinos said. “The re-commitment by the four unions to the long-term future of the international game is an important start as we embark in a new direction.

“This is the first of a number of announcements that will be made over the coming weeks and months as we continue to plan into 2021 and beyond."

South Africa Rugby issued a statement saying the refreshed approach was the first part of “phased redevelopment" of SANZAAR competitions.

“We welcome the changes announced ... with our SANZAAR partners and we are looking forward to see what the new strategic plan for the competition entails, with possible international expansion on the cards,” SA Rugby chief executive Jurie Roux said. ”Although we had to change our domestic focus, we still have a long history with the All Blacks and Wallabies as well as a long-standing friendship with the Pumas and we look forward to more world class test rugby."

Teams from the southern hemisphere have won eight of the nine Rugby World Cup titles to date, a fact Roux said was a "testimony to the high quality of test rugby played on this side of the equator.”

Marinos said the sport's administrators needed to be flexible in uncertain times.

“The disruption during 2020 has been significant,” he said. "However, despite the numerous setbacks and the inherent complexity of our vast geographical expanse, we have managed to keep the game alive and look forward to the remainder of the revised Tri-Nations to bring the curtain down on the 2020 season.”

The shape of future Super Rugby and Rugby Championship competitions is unclear as international travel remains difficult in the COVID era. New Zealand and Australia created their own domestic Super Rugby tournaments when the full, 15-team Super Rugby competition was suspended in March.

Australia and New Zealand will stick with those competitions in 2021, though some cross-over matches between Australian and New Zealand teams are likely. A Pacific team is expected to join a combined trans-Tasman competition from 2022.

The Rugby Championship, now reorganized as a Tri-Nations tournament involving Australia, New Zealand and Argentina, is currently underway. New Zealand thrashed Australia in the opening match last weekend and, in doing so, retained the Bledisloe Cup that is contested between the Tasman neighbors.