Starbucks returns to sales growth in its fiscal Q2 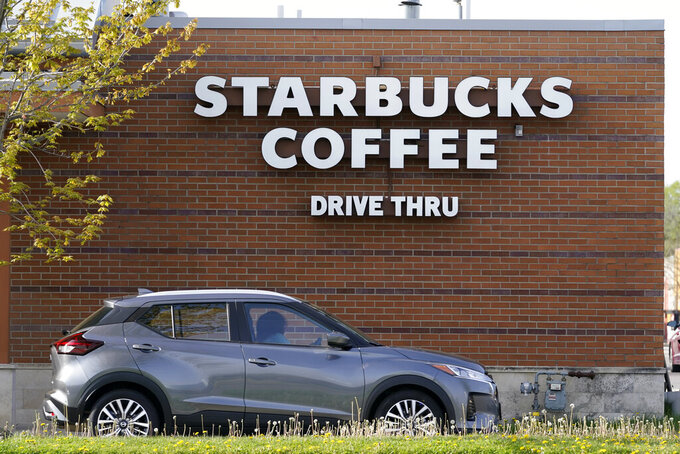 A customers exits the drive thru lane at a Starbucks coffee shop, Tuesday, April 27, 2021, in Des Moines, Iowa. After four straight quarters of sales declines, Starbucks returned to growth in the January-March period. (AP Photo/Charlie Neibergall)

After four straight quarters of pandemic-fueled sales declines, Starbucks is returning to growth.

The Seattle-based coffee giant said Tuesday its sales rose 11% to $6.7 billion in the January-March period. That was just shy of Wall Street’s forecast revenue of $6.78 billion, according to analysts polled by FactSet.

Starbucks President and CEO Kevin Johnson said U.S. growth, in particular, surpassed expectations in the company's fiscal second quarter. Johnson said U.S. sales grew at both urban and suburban locations __ and at all times of the day __ as vaccinations progressed.

“Customers crave human connection," Johnson said during a conference call with investors. “Certainly not all markets are moving at the same speed in terms of vaccine distribution, but we know that this is the key that enables all of us to once again be together.”

U.S. same-store sales — or sales at stores open at least a year — rose 9%, compared to a 3% decline in the same period last year. While store traffic fell 10% from a year ago, customers spent more, growing the average ticket by 21%, Starbucks said.

That has been a trend throughout the pandemic as customers’ usual patterns were disrupted. Starbucks has been seeing fewer morning commuters grabbing a single coffee, but larger orders including snacks and frothy drinks when families and others visit drive-thrus later in the day.

New products are also driving customer interest. Johnson said sales of the plant-based Impossible breakfast sandwich, which was introduced last summer, hit a record high in the January-March period, while sales of alternative dairy drinks __ like a cold brew made with almond milk __ rose 53%.

Johnson said Starbucks' plan to close around 400 U.S. stores is about 70% complete. The company is closing underperforming locations and replacing them, in some cases, with smaller pickup stores or stores with drive-thru windows.

“We are meeting our customers wherever they need us to be," Johnson said.

In China, same-store sales rocketed up 91% in the quarter, reflecting a recovery from last year's store closures. But that was actually a slower pace that the company expected. A resurgence of the coronavirus dampened travel demand during the middle of the quarter, hurting Starbucks locations in places like airports, the company said.

Still, Starbucks opened 110 new stores in China during the quarter, and this week opened its 5,000th store in the country.

Starbucks said its global same-store sales jumped 15% for the quarter, their first increase in a year.

Starbucks said its net income more than doubled to $659.4 million, or 56 cents per share. Excluding one-time items, the company earned 62 cents per share, well above the 53 cents Wall Street forecast.