Stars have 'something to prove' after Stanley Cup final run 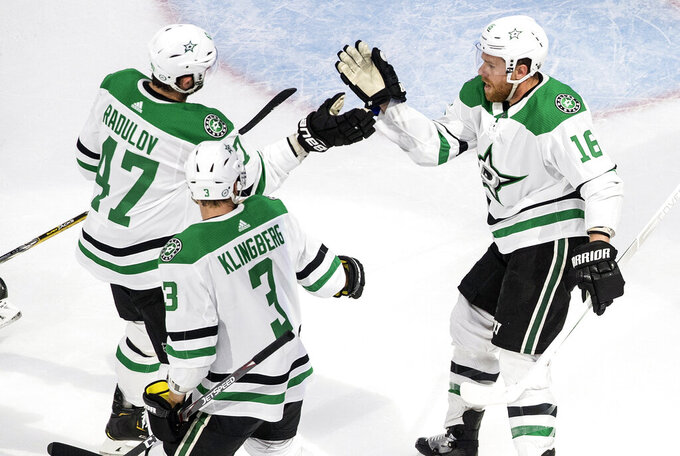 FILE - Dallas Stars' Alexander Radulov (47), John Klingberg (3) and Joe Pavelski (16) celebrate a goal against the Colorado Avalanche during the second period of an NHL hockey Western Conference playoff game in Edmonton, Alberta, in this Monday, Aug. 24, 2020, file photo. The Dallas Stars feel like they have something to prove after falling short in the Stanley Cup Final last season. The relish the opportunity for a better start this season and carry over the success they had in the NHL bubble. (Jason Franson/The Canadian Press via AP, File)

Coach Rick Bowness, captain Jamie Benn and the Dallas Stars were ready to get out of the NHL bubble after two months that ended in the franchise's first Stanley Cup Final appearance since 2000. They now relish the opportunity for better starts and finishes.

“There’s just an air in the locker room right now. All the guys are eager to get going, and we’ve got something to prove. ... We left two games on the table there,” center Jason Dickinson said. “There’s a fire, and that’s the carryover we’re getting instead of in March where we needed to reset going into the bubble.”

The Stars were on a six-game skid when the NHL season was paused in March because of the coronavirus pandemic. Their camp last summer before entering the Edmonton playoff bubble set the foundation for their upswing, and Dallas got to Game 6 in the Cup final before a season-ending loss to Tampa Bay, now a division foe.

The Stars didn't look like a Stanley Cup contender when last season began. They started in October 2019 by winning one of their first eight games.

“We’re kind of treating this shortened training camp like we did in July when we came back. Obviously we want to get off to a better start this year compared to last year,” Benn said. “A totally different experience being stuck in a hotel for 65 days, whatever it was. It was definitely nice getting out of there.”

Dallas has most of the same group back, with Benn (shoulder) and young forward Roope Hintz (fractured ankle, hip) among players who had time to recover after being banged up through the playoff run. All-Star center Tyler Seguin (hip) and goaltender Ben Bishop (knee) will still be out until at least late March rehabbing from surgery, but the only significant losses in free agency were forward Corey Perry and center Mattias Janmark.

The 65-year-old Bowness has shed the interim title as head coach, and had an usual offseason after the final game in September.

“We had to get out of that bubble, that had run its course clearly,” Bowness said. “The summer was the summer that never was for us because we played hockey. I hadn’t been home in Canada in November since I was 16 years old, and that’s not yesterday.”

Anton Khudobin had never started a playoff game before going 14-10 with a 2.69 goals-against average and .917 save percentage in the playoffs with Bishop unavailable because of a torn meniscus in his knee. Khudobin signed a $10 million, three-year contract to stay with the Stars, but the Russian goaltender was delayed in his return to Texas because of a backlog trying to get a U.S. visa and missed the start of camp. That provided valuable extra practice time for 22-year-old goalie Jake Oettinger, whose NHL debut was in the playoffs last season.

Bowness wants to keep Hintz and Denis Gurianov, who broke through in the playoffs as a rookie, on the same forward line together. Another unit will likely again include grizzled veterans Alexander Radulov and Joe Pavelski, whose 13 goals in the playoffs were the most in a single postseason for a player over 36. His 61 career playoff goals are the most for an American-born skater.

Miro Heiskanen, only 21 and with 150 regular-season games to his credit, has already established himself as one of the league’s top defensemen. He has been productive on both ends of the ice, and should only get better. Heiskanen made his playoff debut as a 19-year-old rookie, then last summer led the Stars with 26 points (six goals, 20 assists) in 27 playoff games.

Six-time All-Star center Seguin (torn labrum) was the team’s top scorer during the regular season, but had only two goals in his 26 playoff games. While Perry left for Montreal and Janmark for Chicago, the only significant newcomer was ninth-year NHL defenseman Mark Pysyk from Florida on a $750,000 free-agent deal.

Last season's Western Conference champions are now part of the NHL's Central Division. The only teams with the Stars from their same division, or even conference, last season are Chicago and Nashville. The Stars open Jan. 14-15 with games at the Florida Panthers, then go to Tampa for the first two of eight games this year against the Lightning. Dallas also will finish its 56-game schedule with four road games.