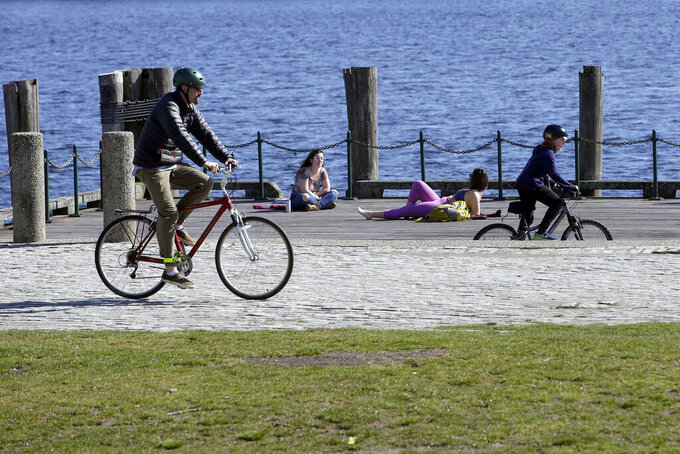 People ride bicycles and sunbathe in India Point Park, in Providence, R.I., as temperatures reach the 60s, Monday, April 6, 2020. Many people are working from home out of concern for the coronavirus. (AP Photo/Steven Senne)

PROVIDENCE, R.I. (AP) — Gov. Gina Raimondo on Tuesday extended to May 8 a series of executive orders meant to keep Rhode Islanders at home during the pandemic.

The orders limit social gatherings to no more than five people, close restaurants for dine-in service, shutter entertainment, recreation and other non-essential businesses, and mandate arriving travelers to self-quarantine for 14 days.

A look at more coronavirus developments in Rhode Island:

Providence is shuttering parks and recreational areas to control the spread of the coronavirus as springtime weather is drawing more residents outdoors.

Golf courses also will be closed effective Wednesday. Violators could face fines ranging from $100 to $500.

Elorza said people should stay close to home and go outside alone or only in small groups.

Thirty people have died and more than 1,200 have tested positive in Rhode Island since the pandemic started, Raimondo said Tuesday.

Nearly 100,000 residents have filed unemployment claims for virus-related reasons, state labor officials said Tuesday. Another 14,000 have also applied for temporary disability benefits because of the virus, the agency said.

More than 60 immigration detainees are on a hunger strike at a Central Falls prison, according to a pastor who has spoken to the detainees. The detainees say they are concerned about the potential spread of the virus at the Donald W. Wyatt Detention Facility and want to be released, Rev. Annie Gonzalez Milliken told The Providence Journal.

Christopher Hunter, a spokesman for the facility, said there no positive coronavirus cases at the facility.

Rhode Island artists are getting a boost from local nonprofits in the pandemic.

The Rhode Island State Council on the Arts announced Tuesday it is launching the Artist Relief Fund to provide grants of up to $1,000 to artists who are in financial distress.

The awards will be made weekly until funds are exhausted. The fund has an initial $100,000 to distribute and will be accepting donations.

The Rhode Island Foundation and the city's Department of Art, Culture and Tourism helped launch the effort, which will be managed by the Alliance of Artists Communities in Providence.

The University of Rhode Island is moving its free training seminars on opioid overdose prevention and treatment online starting this week.

The South Kingstown institution said Tuesday that participants in its Community First Responder Program will still be trained to recognize and respond to a drug overdose.

They'll also learn how to administer the overdose reversal medication naloxone and receive a free kit of the nasal spray and fentanyl test strips by mail.

More information is available at the “RI Community First Responder Program” on Facebook.