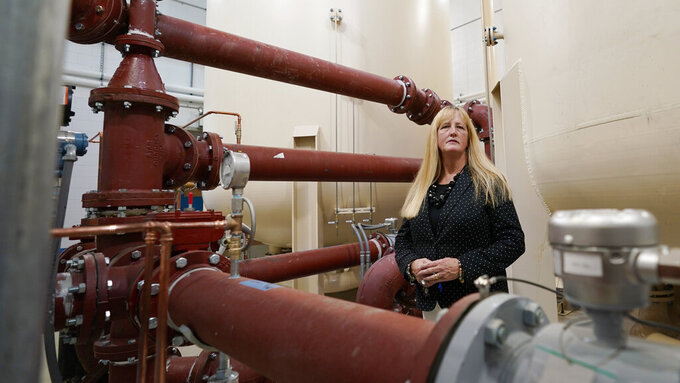 In this Friday, Aug. 14, 2020, photo New Hampshire Rep. Nancy Murphy, D-Merrimack, poses for a photo in the under-construction water filtration site for two of her town's contaminated wells, which is about two miles from the Saint-Gobain plastics factory in Merrimack, N.H. (AP Photo/Charles Krupa)

New Hampshire has denied a request from a chemical company blamed for contaminating drinking water with PFAS chemicals to delay installing smokestack upgrades that would address the problem.

Saint-Gobain had argued the delays are necessary partly due to problems the company’s suppliers and contractors have faced because of the coronavirus pandemic.

But the state found Thursday that the company must move ahead with installing the equipment that is aimed at significantly reducing the release of the harmful chemicals called perfluoroalkyl and polyfluoroalkyl substances, also known collectively as PFAS.

The state “recognizes the effect that the COVID-19 pandemic has had and may continue to have on material delays in the supply chain and vendors' and subcontractors' ability to meet project schedules,” the state said as part of its decision. “However, the fact that COVID-19 has the possibility to cause delays or hardships does not overcome the impacts, including the health impacts, to the public at this time.”

Lia LoBello, a spokesperson for Saint Gobain, said Friday that the company is “evaluating our next steps." ”We are committed to installing the best available control technology," LoBello said.

The company’s requests was among thousands filed across the country, many which were approved, to bypass rules intended to protect health and the environment because of the coronavirus outbreak. Many of the requests came from oil and gas operations, government facilities and other sites which won permission to stop monitoring for hazardous emissions.

Saint Gobain's request angered residents who live near the plant and have long called for the company to do more to address PFAS emissions from its facility.

The state has found that emissions from the company's plant has contaminated more than 1,000 private wells in the towns of Merrimack, Bedford, Litchfield, Manchester and Londonderry — many of which now have been connected to public water systems. That number, however, could grow as a result of tough new new drinking water standards in the state for PFAS that went into effect earlier this year.

State Rep. Nancy Murphy, whose family lives several miles from Saint Gobain and was forced to install a $2,500 filtration system after several town wells were shut down due to PFAS contamination, welcomed the state's decision.

“Today is a great day for Merrimack and other surrounding communities whose air, water and soil have been contaminated by PFAS due to air emissions from the Saint Gobain Performance Plastics facility,” Murphy said in a statement. “Citizens here and across the country need to be able to count on state and federal environmental regulations to protect our planet and public health.”