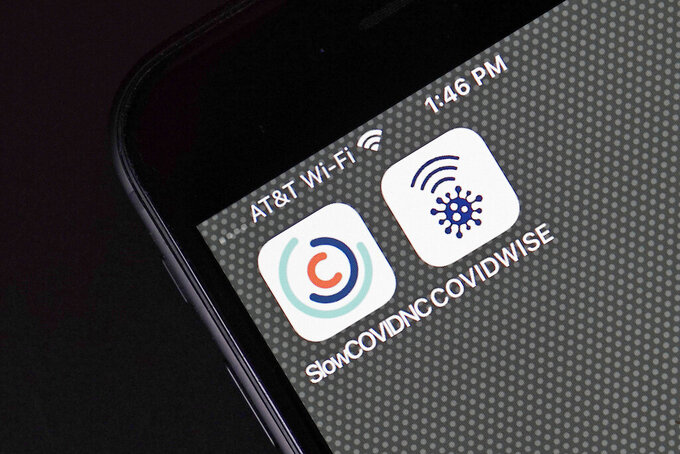 COVID-19 notification apps for North Carolina, SlowCOVIDNC and Virginia, COVIDWISE are shown on a smart phone Friday, Dec. 4, 2020 in Raleigh, N.C. Six months ago, Apple and Google introduced a new smartphone tool designed to notify people who might have been exposed to the coronavirus — without disclosing any personal information. But for the most part, Americans haven't been all that interested. (AP Photo/Gerry Broome)

RALEIGH, N.C (AP) — As coronavirus exposure notification technology slowly rolls out across the country, every resident in 17 states and the District of Columbia will now be able to send and receive alerts beyond their home state if they've tested positive for the coronavirus or come into contact with someone who has.

On Friday, Virginia joined Washington, D.C., and 16 other states that have been using the Association of Public Health Laboratories’ National Key Server, which allows phones to “talk to each other” across state borders. This means users in these 18 areas won’t have to download a separate app in places they are visiting.

Apple and Google co-created the technology that uses Bluetooth wireless signals to anonymously detect when two phones have been in close proximity. A user who tests positive for the virus can have their phone trigger a notification to other people they’ve spent time near.

In August, Virginia became the first state in the country to utilize the technology. It has since recorded nearly 900,000 downloads. It is now the final state to join the national server.

Hawaii and Oregon are piloting an app with a limited population on the National Key Server.

In some states, such as Colorado, Connecticut, Maryland and Washington, Apple users receive a pop-up message from Apple to adjust their iPhone settings to activate the notification feature. Adoption is much higher in these places compared with those that require residents to download distinct app, including North Carolina, North Dakota and Virginia.

Data obtained by The Associated Press from 16 state public health departments shows 8.1 million Americans adopted the contact tracing tool in these areas through late November. That pales in comparison to the roughly 110 million residents in those regions. California did not have an app available in November.

Coronavirus cases have surged across the United States since Thanksgiving, posing a threat to hospitals with limited bed capacity and staffs that have already been stretched thin.

More than 3,000 Americans died in a single day this week, which is more deaths than on D-Day or 9/11. The country has seen over a million cases in five days and 100,000 people currently hospitalized. Since the start of the pandemic, over 290,000 people have died because of COVID-19 nationwide.