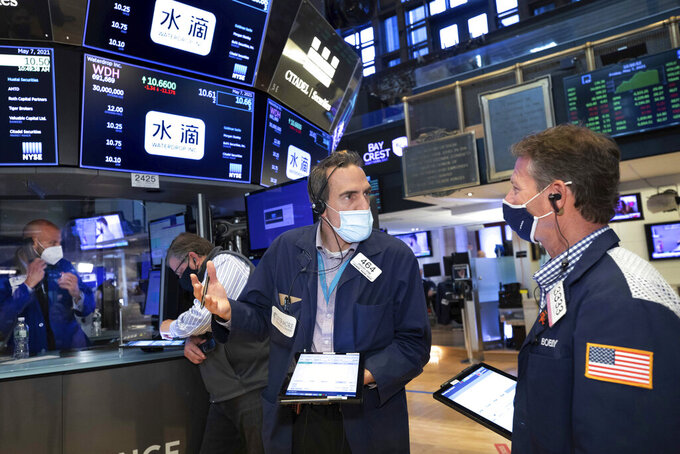 In this photo provided by the New York Stock Exchange, traders Gregory Rowe, center, and Robert Charmak, right, confer on the trading floor, Friday, May 7, 2021. Stocks are rallying to records on Wall Street Friday despite a stunningly disappointing report on the nation's job market, as investors see it helping to keep interest rates low. (Nicole Pereira/New York Stock Exchange via AP)

Stocks rallied to more records on Wall Street Friday as a stunningly disappointing report on the nation's job market signaled to investors that interest rates will likely stay low.

Technology companies accounted for a big share of the broad rally, which included solid gains by stocks in the energy, industrial, and consumer discretionary sectors. The gains helped the S&P 500 notch its eighth weekly gain in the last 10 weeks.

Voices up and down Wall Street acknowledged that Friday morning's jobs report was a massive disappointment. It's usually the market's most anticipated economic data of each month, and it showed employers added just 266,000 jobs in April. That was far fewer than the 975,000 jobs that economists expected and a steep slowdown from March’s hiring pace of 770,000.

“It was a bit of a shock when that headline number hit, but you realize most of, if not all of it, is the result not necessarily of demand, but supply," said Peter Essele, head of portfolio management for Commonwealth Financial Network. ”There seems to be a bit of a labor shortage at the moment."

The weak report jolted the bond market and initially sent yields tumbling. The yield on the 10-year Treasury briefly dropped below 1.49%, toward its lowest level in two months before recovering. By the market's close it was unchanged from 1.56% late Thursday.

Many analysts said they don’t want to put too much emphasis on just one month of discouraging data. They still expect the economy to strengthen mightily as coronavirus vaccinations roll out. The weak jobs number also bolsters the case for the Federal Reserve to keep interest rates low in hopes of boosting the jobs market.

Low rates have been a huge reason for the stock market's recovery from its pandemic low in March 2020. One of the market's biggest fears in recent months has been that a supercharged economy could lead to higher, persistent inflation and force the Federal Reserve to raise rates. The central bank has been holding short-term rates at a record low and buying $120 billion in bonds every month.

After Friday morning's jobs report, investors pared back bets that the Federal Reserve will raise rates soon. Now they see just a 7% chance of an increase in the federal funds rate by the end of the year, down from the 15% probability they were seeing a month ago, according to CME Group.

The April jobs data also decreases the likelihood that the consumer price index will have much impact on the Fed's interest rate policy, even if the report shows a strong pickup in inflation, as economists expect, said Jay Hatfield, CEO of InfraCap Funds.

“We were pretty nervous about this report and the inflation report next week,” he said. “The Fed is probably on hold through the end of the summer, and that's extremely bullish.”

Stocks that have benefited most from low rates, including high-growth tech companies, helped lead the market on Friday. Microsoft rose 1.1%, and Nvidia gained 2% as the tech sector alone accounted for more than 25% of the S&P 500's gain.

Strong earnings reports also helped to boost the market, as companies continue to turn in blockbuster growth for the first three months of the year.

Expedia rose 5.2% after reporting a loss for the first quarter that wasn't as bad as Wall Street expected, and it had better revenue than forecast.

While the sharp slowdown in hiring could calm inflation fears, one measure in the jobs report also showed that wages rose more than economists expected last month.

China reported its trade with the United States and the rest of the world surged by double digits in April as consumer demand recovered, but growth appeared to be slowing.

Japan has decided to extend its state of emergency to curb the spread of COVID-19 infections, which kicked in last month in some urban areas, with people asked to stay home and restaurants to close early. The emergency will continue through the end of the month, instead of ending May 11, officials said.

Worries are growing that Japan's medical system is being stretched thin, straining its ability to roll out vaccinations and treat rising numbers of infections. About 2% of the 126 million people in Japan have been inoculated so far. Opposition is growing against the Tokyo Olympics, set to open in July, with doubts growing whether the government can make good on its promise to have the elderly vaccinated by then.