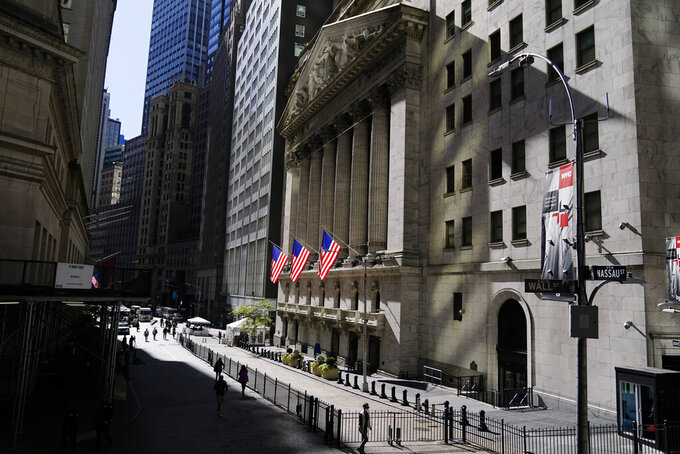 Pedestrians pass the New York Stock Exchange Wednesday, Oct. 14, 2020, in New York. Stocks are mostly lower in Asia after pandemic concerns snapped a four-day winning streak on Wall Street. US stocks are drifting higher Wednesday, Oct. 21, as negotiations continue in Washington on more aid for the economy, though prospects remain cloudy that anything can happen soon.(AP Photo/Frank Franklin II)

U.S. stocks capped another wobbly day of trading with modest losses Wednesday as Wall Street waited for any signs of progress as lawmakers in Washington negotiate over how to deliver more aid for the economy.

The S&P 500 slipped 0.2% after shifting between small gains and losses for much of the day. The benchmark index is on track for its first weekly loss after notching gains in each of the past three weeks. Losses in industrial stocks, health care companies and elsewhere in the market outweighed solid gains by communication services stocks. Treasury yields were mixed.

Much of Wall Street’s focus has been on Washington, where White House officials and Democrats are negotiating on another round of support to prop up the still-struggling economy, though the prospects for a deal that delivers aid soon remain cloudy.

“As long as the parties involved give the market a headline suggesting they’re still negotiating, there’s a kernel of optimism in the market,” said Quincy Krosby, chief market strategist at Prudential Financial. “But then there’s also concern that this is extreme political posturing and that a deal will not be forthcoming.”

Stocks of social media companies were among the biggest gainers after Snap reported even bigger jumps in revenue and in the number of Snapchatters using its service each day than analysts expected.

Google’s parent company rose 2.3%, adding to its gains from a day before when the Justice Department sued it for antitrust violations. Investors had already been expecting such action, and analysts said Google’s counterarguments mean it will likely take years to reach a resolution.

On the losing end was Netflix, which fell 6.9% for one of the largest losses in the S&P 500 after it said growth in its subscriber rolls slumped by more during the summer than it had forecast. It also reported a weaker quarterly profit than analysts expected, following a surge earlier this year when people were yearning for things to watch amid coronavirus-caused lockdowns.

It’s a rare disappointing report in what’s so far been a much better earnings season than Wall Street girded for. Roughly one in six of the companies in the S&P 500 index has reported its results for the July-through-September quarter, and most have topped the low expectations analysts had set.

S&P 500 companies are on track to report a decline of a little less than 18% in earnings per share for the quarter from a year ago, which is not as bad as the 21% drop that analysts were forecasting at the end of the quarter, according to FactSet.

Traders have been keeping one eye on corporate earnings, and another on the prospects for more economic stimulus out of Washington.

The two sides have been making progress, House Speaker Nancy Pelosi told her Democratic colleagues in a letter late Tuesday. She said she hopes discussions will continue, past a self-imposed deadline of Tuesday.

Markets have been swinging recently with the perceived prospects of such stimulus. Investors have been clamoring for it since the summer, when extra benefits for laid-off workers and other support provided by the last round of aid approved by Congress expired.

But even if leaders from the White House and House of Representatives can reach a compromise soon, its fate looks unclear on Capitol Hill due to its growing price tag. Senate Majority Leader Mitch McConnell told fellow Republicans that he has warned the White House not to divide the party by sealing a relief deal before the election that could cost $2 trillion.

Regardless of the opposition, Jeffrey Halley of Oanda said, “the one lesson we can take is that the U.S. fiscal stimulus package remains the only thing financial markets are concentrating on, to the exclusion of everything else.”

While investors focus on government aid prospects, the market is still showing signals that the economy is expected to continue its recovery, said Andrew Slimmon, senior portfolio manager at Morgan Stanley Investment Management. He said smaller company stocks have been gaining ground in a sign of confidence, while bond yields continue rising. The broader market is also seeing more even gains from previously downtrodden sectors, such as industrial companies and businesses that rely on consumer spending.

“There is a lot of focus on Washington, but the market is telling you the economy is coming back very much in a ‘V’ pattern."