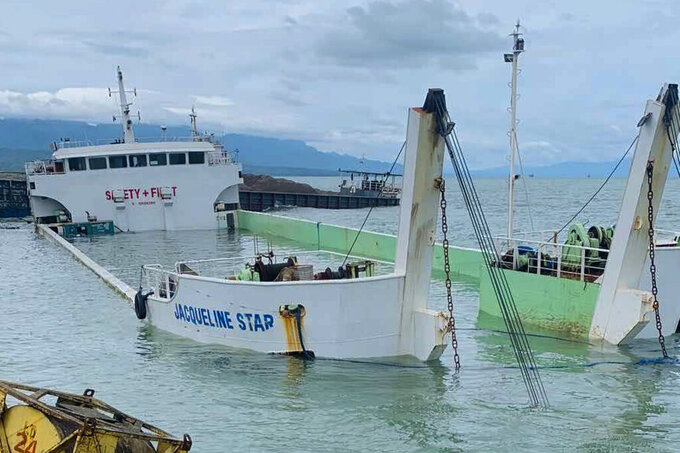 In this photo provided by the Philippine Coast Guard, a half-submerged LCT Jacqueline star ship is seen after its crew abandoned ship as Tropical Storm Choi-wan hits Albuera, Leyte province, central Philippines on Wednesday June 2, 2021. The tropical storm has left several people dead and displaced hundreds of villagers in the southern and central Philippines, where it set off flooding and landslides, officials said Wednesday. (Philippine Coast Guard via AP)

MANILA, Philippines (AP) — A tropical storm left at least three people dead and displaced thousands of villagers in the southern and central Philippines, where it triggered floods and landslides, officials said Wednesday.

Forecasters said the storm Choi-wan was blowing off Victoria town in Oriental Mindoro province south of Manila on Wednesday afternoon with sustained winds of 65 kilometers (40 miles) per hour and gusts of up to 90 kph (56 mph). It was moving northwestward and may weaken as it blows toward the South China Sea on Thursday, they said.

At least three people died, including a 14-year-old villager who rushed with her father to a riverbank to rescue their farm animals in intense rain but were swept away by strong currents in Norala town in South Cotabato province. The father remains missing, disaster response officials said.

A baby died in a landslide that hit a mountainous town in southern Davao de Oro province and a 71-year-old man drowned in Davao del Sur province, also in the south, officials said.

Coast guard personnel rescued villagers who were trapped in houses engulfed in rising floodwater, including in Southern Leyte province, where they carried 40 residents, including children, in waist-deep waters to a gymnasium.

More than 2,600 people were displaced, mostly by floods, in 18 southern villages, including about 600 villagers who moved to evacuation centers. Thousands more were evacuated Tuesday from towns prone to floods and volcanic mudflows in Albay province, provincial safety official Cedric Daep said.

More than 3,000 passengers and cargo handlers were stranded in central and southern seaports after sea travel was suspended by the coast guard due to stormy weather. A small cargo ship laden with sand and gravel was abandoned by its crew when it started to take in water near Albuera town in central Leyte province. The crew was safe, coast guard spokesman Armand Balilo said.

About 20 tropical storms and typhoons batter the Philippine archipelago each year. The Southeast Asian nation is also located in the Pacific Ring of Fire, a seismically active region where volcanic eruptions and earthquakes occur frequently, making it one of the most disaster-prone countries in the world.