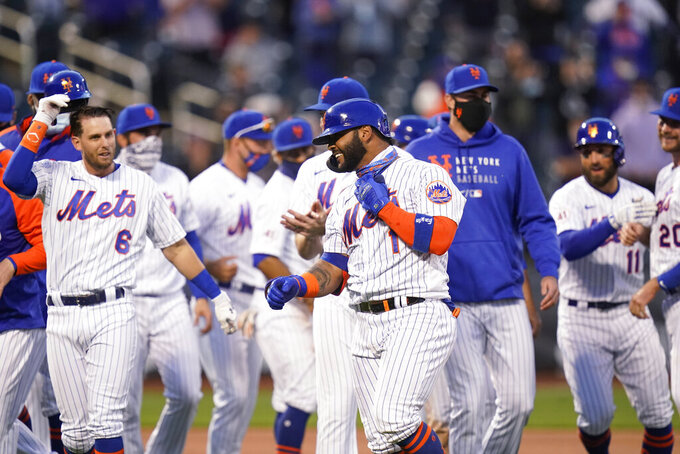 New York Mets' Jonathan Villar (1) celebrates with teammates after a baseball game against the Philadelphia Phillies in the first game of a doubleheader Tuesday, April 13, 2021, in New York. The Mets won 4-3. (AP Photo/Frank Franklin II)

Brandon Nimmo had three hits and three RBIs from the leadoff spot. Jonathan Villar followed up his game-winning single in the opener with a run-scoring double, and Stroman (2-0) outpitched Phillies ace Aaron Nola.

Both games of the single-admission twinbill, booked to make up Monday night’s rainout at Citi Field, were scheduled for seven innings in keeping with a rules change introduced during the pandemic-shortened 2020 season.

In the first game, Pete Alonso and Villar each hit an RBI single in the eighth to give New York a 4-3 victory in extra innings. Dominic Smith socked an early two-run homer for the Mets.

Stroman's outing Sunday against Miami lasted only nine pitches because the game was suspended due to rain. He tweeted his displeasure, saying the game never should have started and he hated that he would have to wait another five days to pitch again.

Mets manager Luis Rojas initially said Stroman would remain on four days of rest and pitch Friday at Colorado. After the postponement Monday was announced, however, Rojas reversed course and said Stroman would start the nightcap Tuesday.

Rojas said Stroman at first wanted to recreate his entire between-start regimen, including a bullpen and workouts. But after playing catch Monday, he told his manager his arm would be ready for Tuesday and he was taking the ball in the nightcap to be there for the team.

“That was nice to hear, of course,” Rojas said.

The cocksure 5-foot-7 right-hander hopped around excitedly all night, slapping his glove after inducing a pair of inning-ending double plays and even flipping his bat away after drawing a late walk at the plate.

Stroman was perfect over the first three innings and faced the minimum through four. He permitted four hits, all singles, and walked none. He struck out three and threw 86 pitches.

Jeurys Familia got three outs to finish the six-hitter.

Villar doubled home a run off Nola (0-1) in the fourth, and Nimmo added a two-run single. Tomás Nido hit his first career triple in the sixth and scored on Nimmo's single.

With the Mets down a run in the first game, Alonso opened the bottom of the eighth with a sharp single off Héctor Neris (0-1) that scored placement runner Francisco Lindor from second. It was New York’s first hit since the second inning.

Jeff McNeil beat out a potential double-play ball, Michael Conforto walked and James McCann’s infield single loaded the bases with one out.

Villar, who entered as a pinch-runner in the seventh, lofted a full-count pitch to left-center over the head of left fielder Andrew McCutchen, playing shallow in hopes of cutting off the winning run.

“It’s good to see those big hits in those moments,” Rojas said. “You can see the guys’ timing coming together.”

Aided by McCann’s passed ball, the Phillies went ahead 3-2 in the top of the eighth on Didi Gregorius’ two-out infield single. Trevor May (1-1) then struck out Jean Segura with two runners in scoring position and got his first win for the Mets.

Taijuan Walker struck out eight over 4 1/3 innings in his second start with New York, again showing some increased velocity on multiple pitches in his repertoire.

“I feel like today I had all five that were swing-and-miss pitches,” Walker said. “I just thought it was an overall great team win.”

Miguel Castro escaped the fifth with a one-run lead thanks to a terrific defensive play by substitute third baseman Luis Guillorme to thwart a double steal.

“That was a game-changer,” Rojas said.

Smith homered in the first inning, his second two-run shot off Chase Anderson in a week.

There was some barking back and forth between the Mets’ bench and Phillies reliever José Alvarado during the first game after the left-hander buzzed Conforto up and in and then drilled him near the right wrist with a 100 mph fastball in the sixth. Alvarado gestured dismissively in the direction of New York’s dugout, but nothing more came of it.

The Mets were finally back on the field after showers stymied them the previous two days. New York had played just five games in the first 12 days of the season because of a COVID-19 outbreak among the Washington Nationals and then wet weather.

Several top hitters are off to slow starts, and the Mets have struggled at the plate with runners in scoring position.

“It kind of feels like spring training. Except the games mean a lot,” Lindor said before the opener. “We can’t make any excuses. We’ve got to start winning ballgames.”

Phillies: Knapp caught the first game, and All-Star backstop J.T. Realmuto was behind the plate for the second. ... Matt Joyce replaced McCutchen in LF for the nightcap. ... With reliever Archie Bradley placed on the 10-day injured list Sunday because of a strained left oblique, top prospect Spencer Howard was added to the roster as the 27th man for the twinbill. The right-hander made his first professional relief appearance in the second game, allowing a run in the sixth.

Mets: Guillorme started the opener at 3B for J.D. Davis (bruised left hand), who is eligible to come off the injured list Saturday. Villar started at the hot corner in the second game. ... LHP Stephen Tarpley was recalled from the alternate training site to serve as the 27th man on the roster.

Phillies: RHP Zack Wheeler (1-1, 2.31 ERA) pitches Wednesday night against his former team. Wheeler went 1-0 with a 3.54 ERA in three starts versus the Mets last season, his first since leaving for a $118 million, five-year contract with Philadelphia.

Mets: Second-year lefty David Peterson (0-1, 13.50) makes his second start of the season after giving up a career-high six runs and seven hits, including two early homers, over four innings last week in Philadelphia. Peterson has a 16.50 ERA in two career starts against the Phillies (11 runs in six innings) and a 2.64 ERA in nine outings against all other teams.