Students line up for vaccines amid push to relax masking 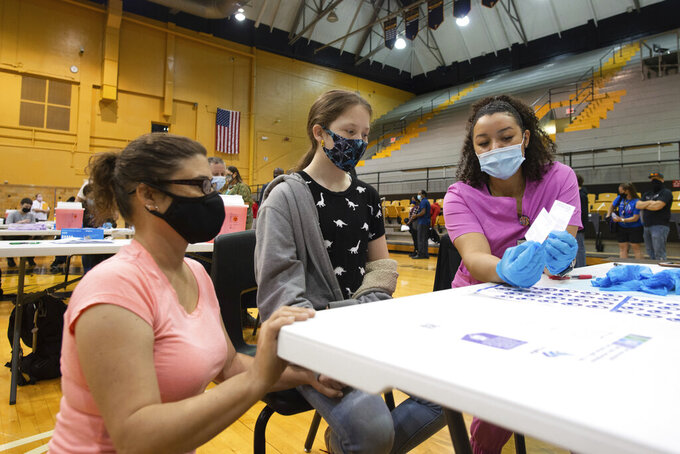 TOPEKA, Kan. (AP) — Kansas schools are stepping up efforts to administer COVID-19 vaccines to newly eligible 12-to 15-year-olds as more districts relax mask rules or face pressure to do so.

Hundreds of students from public and private schools gathered Monday to get immunized at Topeka High School, The Topeka Capital-Journal reports.

“We were surprised that so many people were here,” said Richard Bolejack, as he took his daughter, a freshman at nearby Shawnee Heights High School, to the vaccine clinic. “We were like ‘Wow’ because we didn’t think that would be the case.”

The students were joined by Gov. Laura Kelly, who touted the effort as the state aims to increase its vaccination rate. School districts from Manhattan to Olathe are conducting similar clinics, and the Kansas Department of Health and Environment and the Kansas National Guard are chipping in support as needed.

But the governor pointed to a statewide drop in demand for the shots, stressing that the next frontier would be making the shots available at doctor’s offices throughout Kansas.

“We thought it very important to take the vaccines to the people, rather than expecting them to come to something like this,” Kelly said. “They made it very clear that wasn’t going to happen anymore.”

The Shawnee Mission school district, meanwhile, decided Monday to continue to require students and staff members to wear masks in school until the end of the year despite protests, KSHB-TV reports.

Kristin Butler, who has two children in the school district, was among about two dozen parents who held signs demonstrating against the mask policy before the decision was made.

“I am fighting for my children’s right to breathe in school,” she said.

Parent Julia Garrard, however, argued that the mask requirement should remain in place, noting that children like her 11-year-old son Oskar aren't yet eligible to be vaccinated.

The school district will likely reevaluate its policies ahead of the upcoming school year after seeking guidance from health officials, said spokesperson David Smith.

“We’re hopeful maybe this summer, younger kids will be eligible,” Smith said. “Clearly the way to move past the pandemic is to get more and more people vaccinated, including younger children, so we just have to work to get through that.”