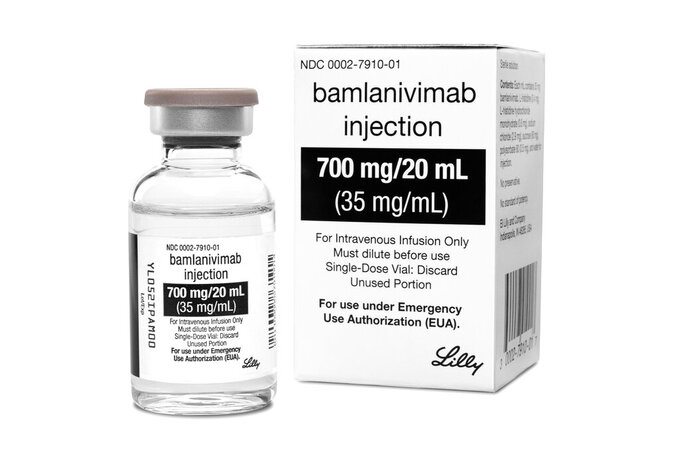 This photo provided by Eli Lilly shows the drug bamlanivimab. On Tuesday, Jan. 26, 2021, the company said that the two-antibody combo of bamlanivimab and etesevimab reduced the risk of hospitalizations or death by 70% in newly diagnosed, non-hospitalized COVID-19 patients at high risk of serious illness because of age or other health conditions. (Eli Lilly via AP)

New results extend hopes for drugs that supply antibodies to fight COVID-19, suggesting they can help keep patients out of the hospital and possibly prevent illness in some uninfected people.

Eli Lilly said Tuesday that a two-antibody combo reduced the risk of hospitalizations or death by 70% in newly diagnosed, non-hospitalized COVID-19 patients at high risk of serious illness because of age or other health conditions. All 10 deaths that occurred in the study were among those receiving placebo rather than the antibodies.

Separately, Regeneron Pharmaceuticals Inc. said partial results from an ongoing study suggest its drug combo completely prevented symptomatic infections in housemates of someone with COVID-19. Importantly, the drug was given as multiple shots rather than through an IV. The need for an infusion has greatly limited the use of antibody drugs in the pandemic because of health care shortages.

None of the new results have been published or reviewed by other scientists, and the Regeneron ones were based on only one quarter of patients in its study and were not a planned early analysis.

Antibodies are proteins that attach to a virus and block it from infecting cells, but it takes several weeks after infection or vaccination for the most effective ones to form. The drugs aim to help right away, by supplying concentrated doses of one or two antibodies that worked best against the coronavirus in lab tests.

U.S. regulators have allowed emergency use of some Lilly and Regeneron antibodies for mild or moderate COVID-19 cases that do not require hospitalization while studies of them continued.

The drugs are also being tested to prevent infection in those at high risk of it. That’s called “passive vaccination” because it supplies antibodies rather than prompts the body to make them. Both companies are asking regulators to expand authorization of their drugs based on the new findings.

Regeneron’s results were on the first 409 people in a study that has enrolled more than 2,000 so far. All tested negative for the virus but live with someone who has COVID-19.

Lilly’s new results were from a study of 1,035 non-hospitalized patients recently diagnosed with COVID-19. About 2% on the drug were later hospitalized or died versus 7% of the placebo group.

Last week, Lilly said one of the two antibodies helped prevent illness among residents and staff of nursing homes in a different study. The four deaths that occurred in that study were all among those given placebo.