Study says future of New Mexico may include fewer people. 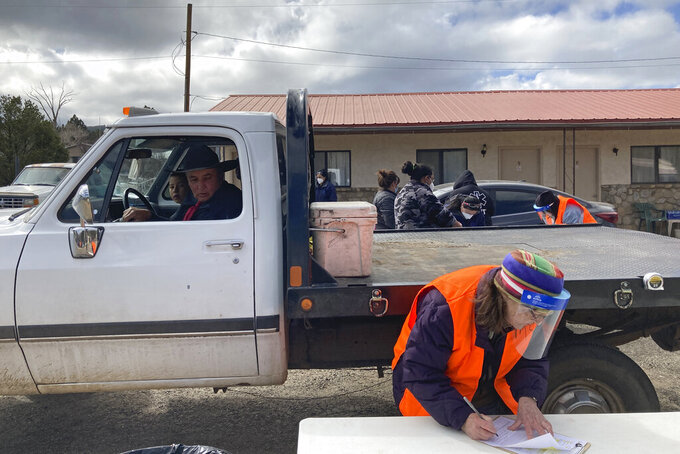 Motorists including Elmer Serna, in driver's seat, awaited vaccine shots as medical workers complete paperwork at a drive-thru immunization clinic at a motor inn in Mora, N.M., on Tuesday, April 20, 2021. New Mexico is among the states with the highest rates of vaccination for COVID-19 and efforts are underway to respond to skepticism and misinformation about the effectiveness and risks of immunization. First Lady Jill Biden was kicking off a visit to the U.S. Southwest with a tour of a vaccination clinic in Albuquerque. (AP Photo/Morgan Lee)

SANTA FE, N.M. (AP) — Flanked by booming economies and community growth, New Mexico is likely to watch its population count plateau in the aftermath of the coronavirus pandemic and then slowly decline with a pronounced drop in school- and working-aged residents and a drain on rural areas, authors of a report on demographic trends announced Thursday.

The report from the Legislature’s budget and accountability office adds to indications in the 2020 census of a slowdown in population growth across large swaths of the high-desert state. It suggests that schools and universities in particular may want to plan accordingly to conserve resources and adapt.

At the same time, an increase in the number of elderly residents will place a greater financial strain on programs such as Medicaid and Medicare. There about 2.1 million residents in the state with a land area similar in size as Italy.

“In about a decade, New Mexico is projected to start seeing overall declines in population. ... Declines in younger ages and rural areas will continue and likely be exacerbated by Covid-19,” states the report from staff at the Legislative Finance Committee. “Given the status quo, New Mexico is heading toward having more, older New Mexicans using relatively expensive public services and fewer, younger New Mexicans in school and working.”

Authors told a panel of state legislators on Thursday that the projections, based on the 2010 census and interim surveys, are likely to be revised based on the results of the 2020 census.

The first available numbers this week from the 2020 census show New Mexico’s population grew by 2.8% over the last decade, making it one of the slowest-growing states in the West. In the West, only Wyoming had a slower growth rate.

Neighboring Texas and Colorado are set to gain congressional seats as a result of population increases.

State lawmakers and economic development officials have been trying for years to attract new employers and shore-up the working-age population with subsidies and tax incentives for businesses, while grappling with a relatively weak economy and poor national rankings in education, health and safety.

“It sounds like this is going to be a new issue for the legislature to tackle,” said Republican state Rep. T. Ryan Lane of Farmington. "I worry about my kids and my grandkids when you have a decline in population. That has a trickle-down effect to the rest of the economy and the rest of our way of life.”

In a counterpoint to those worries, state Rep. Susan Herrera of Embudo says she has witnessed an influx of people and competitive bidding on real estate in northern New Mexico.

Among other findings, the number of white, non-Latino residents across New Mexico is falling and may soon be surpassed by Latinos.

The report notes that a declining statewide birthrate — partly attributed to reduced births among teens — is likely to decline further amid the economic stress of the pandemic and its aftermath.

Hopes still abound that the pandemic and a shift to remote work with bring new interest in New Mexico.

“Once we start coming out of the pandemic, you know I think New Mexico’s going to be the place people really want to be,” said Dominic Gabello, a former senior adviser to Gov. Michelle Lujan Grisham, in a media briefing earlier this year. He left the administration this month. “They want to get out of the big cities. They want to get away from the coast. We have great quality of living. ... We’re where people are looking to be right now.”

Between 2010 and 2019, nearly 60,000 more people moved out of New Mexico than moved in to the state. People exiting the state went primarily to Texas, Arizona, Nevada and Oklahoma.