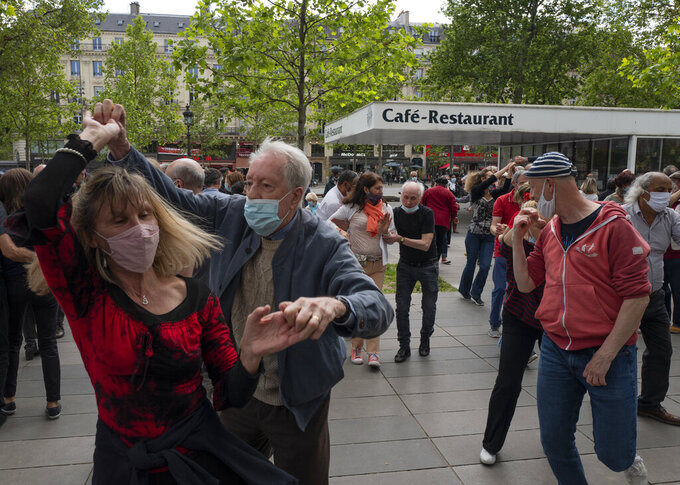 A couple with protective masks on dance at Republic square in Paris, Sunday, May 23, 2021. Cinemas, as cafe and restaurant terraces, museums, and theaters are reopening their doors after a shutdown of more than six months in the first stage of a government strategy to incrementally lift restrictions to stave off COVID-19, and give the French back some of their signature "joie de vivre." (AP Photo/Rafael Yaghobzadeh)

PARIS (AP) — An increasing number of French are feeling anxious and having a hard time falling asleep at night, apparent effects of the coronavirus pandemic that have led many people to turn to prescription drugs to deal with their discomfort, a report said Thursday.

The report, commissioned by two government agencies that track pill use, showed a steady climb in the sale of medication to help cope with anxiety, depression, insomnia and other psychic ills over more than a year, with a spike during the past four months.

The report, covering the delivery of medication from March 16, 2020, to April 25, 2021, was carried out by Epi-Phare, which conducts pharmacology and epidemiology studies for government authorities.

“The use of anti-anxiety, sleeping medication and also, more recently anti-depressants, does not stop increasing,” it said. “The strong tendency of an increase in the use of these three classes of medication was further amplified in 2021 with (use) up more than 5% to 13% according to the medication and increases in new use of 15% to 26% over what was expected.”

Since the start of the first pandemic confinement more than a year ago, there have been 7 million more doses of such drugs sold than would have been expected, the report said. Sales of medication to fight alcoholism, which had been stable in 2020, have climbed since the start of this year, it said.

The increases “probably reflect the important psychological impact of the COVID-19 epidemic on the French population and its medical, social, professional and economic consequences,” the report said, noting studies around the world that have linked mental health troubles and the virus.

The French have long been known to rely on medication to calm their ills. A 1996 study, commissioned by the Health Ministry, found that the population was consuming three to four times as many tranquilizers, antidepressants and sedatives as people in the United States or any other European country.

Unlike the current report, that one did not venture to explain why.