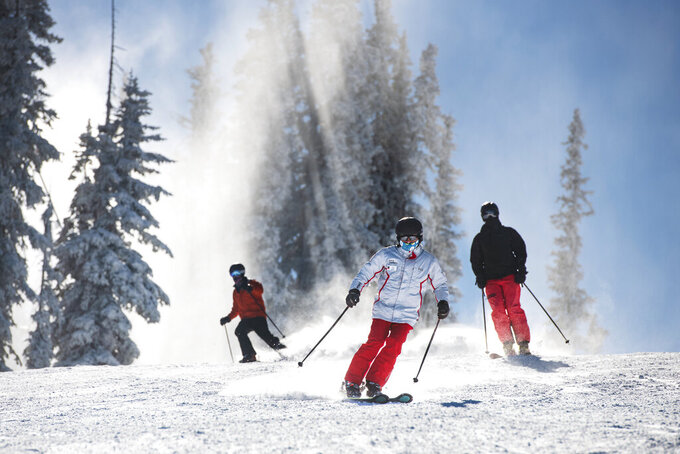 FILE - In this Nov. 25, 2020, file photo, skiers enjoy freshly-made snow on Aspen Mountain's opening day of the ski season in Aspen, Colo. Ski areas across the United States experienced a strong rebound this winter season despite public health restrictions put in place amid the coronavirus pandemic. Skier visits to U.S. resorts totaled 59 million this winter season, the fifth best on record, according to the Colorado-based National Ski Areas Association. A visit is considered the use of a lift ticket for any part of the day. (Kelsey Brunner/The Aspen Times via AP, File)

DENVER (AP) — Ski areas across the United States experienced a strong rebound this winter despite public health restrictions put in place amid the coronavirus pandemic.

Skier visits to U.S. resorts totaled 59 million for the season, the fifth best on record, according to the Colorado-based National Ski Areas Association.

“What a year it has been," said Kelly Pawlak, association president and CEO. "From utter uncertainty to a top-10 season in terms of participation, it shows the wide spectrum that our industry bridged this year.”

Resorts across the country were forced to close in spring 2020, and many mountain communities were disproportionately affected by COVID-19 early in the pandemic.

The U.S. ski industry lost at least $2 billion that winter, and skier visits fell 14% compared with the 2018-2019 season. U.S. ski areas tallied about 51.1 million visits in the shortened season. A visit is considered the use of a lift ticket for any part of the day.

But about seven months later, chairlifts started turning again, and guests embraced a new normal while skiing and snowboarding.

They wore masks, rode lifts only with their groups, and stood 6 feet (1.8 meters) apart in lines, or about the length of a typical ski. There was no dine-in service and no large gatherings for apres-ski drinks.

Vail Resorts, which owns 34 resorts in the United States and Canada, went a step further by requiring reservations.

But even with the restrictions, skiers and snowboarders weren't deterred, and 78% of ski area operators said this season exceeded their expectations, according to a National Ski Areas Association survey.

Katherine Fuller, a spokeswoman for Colorado's Arapahoe Basin ski area, said the season was “definitely a hard one for all of us.”

“But people wanted to ski and ride, and it felt kind of at times like one of the few things you could do because it was all outside,” she said. “We just kind of just sort of rolled with it, and it worked out. It was far better than we expected. I think people really enjoyed themselves.”

The ski area near the Continental Divide restricted the number of skiers and snowboarders allowed on the mountain each day based on terrain, the number of lifts running and public health orders at the time. It closed out its winter season Sunday.

The average U.S. ski area was open for 112 days this past season, up from 99 days in the shortened 2019-20 season, according to the association. Most ski areas remained open as long as they had initially planned.

Meanwhile, small and medium-sized ski areas, which are defined by lift capacity, performed well because more guests chose to stay close to home for ski trips. Capacity restrictions, remote work opportunities and school flexibility also meant more skiers and riders hit the slopes on weekdays, easing some of the congestion typical of weekends and holidays.

“People had to change their habits during the pandemic, and ski areas were no different,” Pawlak said. “We tried new things and quickly learned that not only did they function as planned, but many of these ‘work-arounds’ improved the experience for our guests and staff members."

The National Ski Areas Association is a trade group for ski area owners and operators and represents more than 300 alpine resorts that account for more than 90% of skier and snowboarder visits nationwide. The organization has been tracking ski area visitation since 1978.