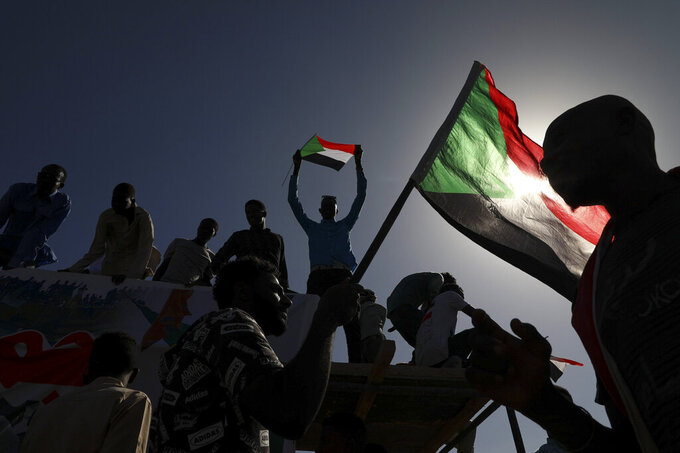 FILE - In this Nov. 19, 2019 file photo, people gather as they celebrate first anniversary of mass protests that led to the ouster of former president and longtime autocrat Omar al-Bashir. in Khartoum, Sudan. On Thursday, June 25, 2020, the United States, Germany and France have pledged hundreds of millions in aid to Sudan. The funds are intended to help the struggling African nation a year after pro-democracy protesters forced the removal of its long-time autocratic ruler, Omar al-Bashir.(AP Photo, File)

CAIRO (AP) — Sudan’s protest leaders announced Thursday that they oppose the government’s economic reform plan to slash fuel subsidies and float the Sudanese currency, raising the specter of unrest as the country makes a fragile transition to democracy.

The rejection came a day after Prime Minister Abdalla Hamdok, a former senior U.N. economist, announced the gradual lifting of energy subsidies, which eat up 36% of the government’s budget. It is part of an economic overhaul sought by the International Monetary Fund to lower Sudan's debt and prime the economy for growth.

The subsidy cuts are already underway, and many people are paying over five times what they did last year to fill up their gas tanks.

The devaluation of the Sudanese pound and the "complete liberalization of fuel prices will have a negative impact on people’s lives, transportation and pensions,” said a statement from economic experts within the opposition coalition, the Forces for the Declaration of Freedom and Change, or FFC.

“The pursuit of these policies will force people into a dangerous and unbearable state,” the statement said.

Years of mismanagement under al-Bashir, now imprisoned on corruption charges, coupled with harsh U.S. sanctions, brought the economy to its knees. The transitional government has struggled to stop the tailspin, drawing sharp criticism from the opposition coalition.

Now, the coronavirus pandemic is compounding the challenges. Inflation has hit 136%. Public revenues are down 40%. The Sudanese pound recently hit a record low on the black market.

Scrambling to rescue the economy, the government reached an initial agreement last month with the IMF and it hosted its first international donors conference, which brought in $1.8 billion. But the help is presumably contingent on an ambitious economic strategy that involves overhauling the government’s sprawling and expensive subsidy system.

To ease the shock, officials are rolling out direct cash payments to poor families. But Sudan’s civil society movement fears the economic adjustments will squeeze the poor and middle class.

If Hamdok presses forward with the changes next month, protesters warn they will go back to the streets.

“Lifting fuel subsidies is like opening a crater of fire,” said activist Asil Abdu. “The protests need no planning. People on the street are already about to explode.”

Hamdok announced a major Cabinet reshuffle earlier this month that pushed out the finance minister, who had spearheaded the unpopular changes required by the IMF to extend Sudan a credit line.

The FFC statement urged the government to cancel the former finance minister’s policies and adopt “a different strategy to tackle the living conditions of ordinary people.”

Although vehicle owners who tend to be more well-off are now hit hardest, many expect the effects of deep energy subsidy cuts to soon trickle down to the poor, as a spike in transportation costs leads to surges in prices of other goods.

“This decision will force authorities into a dramatic confrontation with the masses,”said FFC activist Adel Keller.

He recalled that al-Bashir’s government scrapped fuel subsidies in September 2013 and set off days of riots that left dozens dead. That violent week — as well as the uprising that overthrew al-Bashir's three-decade rule — should stand as warnings about the consequences of forcing Sudan’s most impoverished citizens to subsist on even less, he said.

“The poor are always on the front lines of these protests, the ones hurt most,” Keller said. “This government’s popularity is declining fast.”