Sudanese demand reforms a year after deal with generals 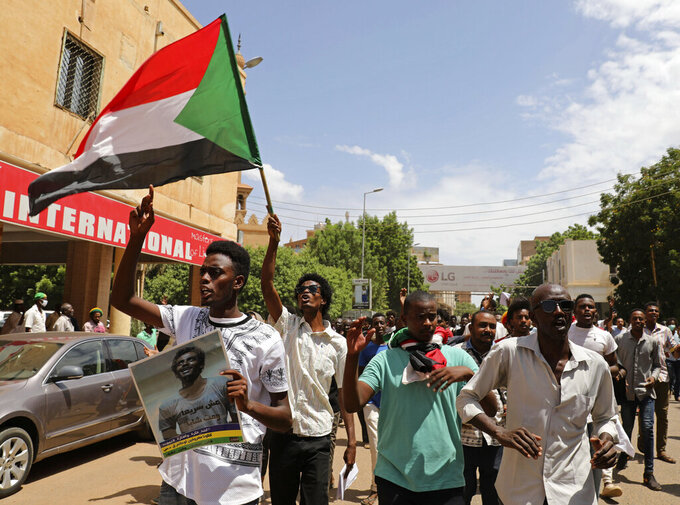 Sudanese protesters wave a national flag as they march to the Cabinet’s headquarters in the capital, Khartoum, Sudan, Monday, Aug. 17, 2020. The protesters returned to the streets Monday to pressure transitional authorities for more reforms, a year after a power-sharing deal between the pro-democracy movement and the generals. (AP Photo/Marwan Ali)

CAIRO (AP) — Sudanese protesters returned to the streets Monday to call for more reforms a year after a power-sharing deal between the pro-democracy movement and the generals.

Sudan is on a fragile path to democracy after a popular uprising led the military to overthrow former autocratic President Omar al-Bashir in April 2019. A military-civilian government now rules the country, with elections possible in late 2022.

The demonstrations were organized by local groups linked to the Sudanese Professionals’ Association, which spearheaded the uprising against al-Bashir.

The crowds, waving Sudanese flags, gathered outside the Cabinet’s headquarters in the capital, Khartoum, to hand over a list of demands, including the formation of a legislative body.

The Sudan Doctors’ Committee, which is part of the protest movement, said police also used batons and fired rubber bullets to disperse the protesters. It said at least four people were wounded and that others suffered breathing difficulties because of the tear gas.

Organizers said the protesters were furious after Prime Minister Abdalla Hamdok sent an aide to meet with them instead of coming out in person.

Khartoum Gov. Ayman Khalid acknowledged that police used “excessive force” against the protesters. He said in a statement that authorities ordered the release of all protesters detained in Monday’s demonstrations. He did not say how many people were detained.

Protesters also took to the streets in Khartoum’s twin city, Omdurman, and several other cities.

Hamdok, the prime minister, on Monday urged public and political support for his government to achieve needed reforms, including transitional justice.

“The state apparatus needs to be rebuilt. The legacy (of al-Bashir’s regime) need to be dismantled and the civil service needs to be modernized,” he said in a statement.

Monday’s protests marked a year after the generals signed a power-sharing agreement with the Forces for Declaration of Freedom and Change, a coalition of opposition parties and movements representing the protesters.

The deal created a joint civilian-military “sovereign council” to rule the country until elections and established a Cabinet appointed by the activists. A legislative body was supposed to be formed within three months but has yet to be established, and the civilian leadership has struggled to assert its authority.

“The course of the revolution should be corrected," activist Awatef Ossman said, calling the military's presence in the government a “clear and specific obstacle."

The protesters also called for a conference to decide how to address the country's daunting economic challenges, the official SUNA news agency reported.

Battered by decades of U.S. sanctions, civil war and mismanagement under al-Bashir, Sudan suffers from high inflation, which reached over 100% in recent months, a foreign debt at close to $60 billion and widespread shortages of essential goods, including fuel, bread and medicine.

Sudan is also struggling to contain a coronavirus outbreak that has infected around 12,500 people and caused more than 800 deaths. Testing is limited, and the country's health infrastructure is ill-equipped to cope with the pandemic.

The Sudanese economy contracted by 2.5 percent in 2019 and is projected to shrink by 8 percent in 2020, according the International Monetary Fund.