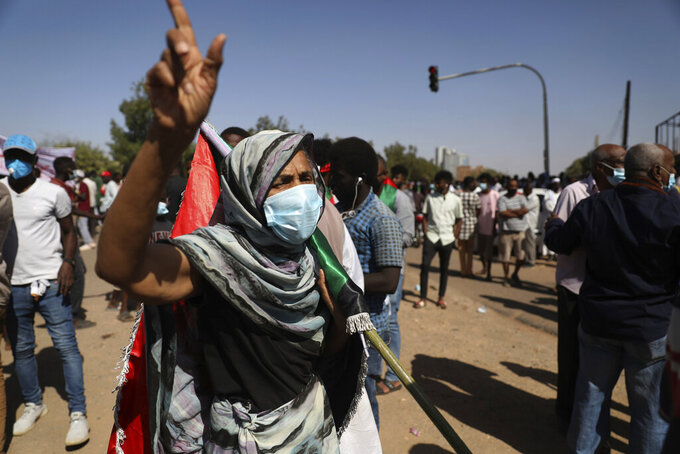 Protesters gather in Khartoum, Sudan, Saturday, Dec. 19, 2020. Protests in Sudan’s capital and across the country are demanding a faster pace to democratic reforms, in demonstrations that are marking the two-year anniversary of the uprising that led to the military’s ouster of strongman Omar al-Bashir. (AP Photo/Marwan Ali)

CAIRO (AP) — Protests in Sudan's capital and across the country on Saturday demanded a faster pace to democratic reforms, in demonstrations that marked the two-year anniversary of the uprising that led to the military’s ouster of strongman Omar al-Bashir.

The protests come amid rising tensions between military and civilian members of Sudan's transitional government, which was set up after al-Bashir's arrest in April 2019 and has promised sweeping reforms.

In the capital of Khartoum, protester Mosaab al-Shraif said he took part in the demonstrations to pressure the transitional government to carry out the demands of the 2018 uprising.

“We've come out to fulfill the demands of our revolution that have not been fulfilled and bring down all of them,” he said in a reference to al-Bashir’s legacy.

Tensions have largely centered on the Sudanese military's economic assets, over which the civilian-run finance ministry does not have control.

Saturday's “million-man march” was called by the Sudanese Professionals’ Association, and the so-called Resistance Committees, which were instrumental in leading protests against al-Bashir and demanding the army generals who replaced him share power with civilian officials.

Security forces closed off major roads and streets leading to government and military headquarters in Khartoum ahead of the protests.

Footage circulating online Saturday showed thousands of protesters marching in Khartoum and its twin city, Omdurman, as well as in other cities across the country. Protesters set tires ablaze in some areas in the capital. There were no immediate reports of casualties.

The protesters have called for a swift formation of a legislative body. Creating an interim parliament was part of a power-sharing agreement signed in August 2019 between pro-democracy protesters and the country’s powerful military.

The demonstrations have also renewed calls for a government-commissioned investigation into the violent dispersal of a protest camp outside outside the military headquarters in Khartoum in June 2019.

According to the protesters, at least 128 people were killed and hundreds went missing. Authorities put the death toll at 87, including 17 inside the sit-in area.

The probe was supposed to have been completed by February, but investigators asked for an extension, in part due to the coronavirus pandemic.

The transitional government faces steep challenges in transforming Sudan’s economic system and meeting the demands of the protest movement, which has been spurred by soaring prices of staple goods and rising youth unemployment.

The government has been struggling with a huge budget deficit and widespread shortages of essential goods, including fuel, bread and medicine.

Annual inflation soared past 200% in the past months as prices of bread and other staples surged, according to official figures.

The demonstrations have come amid an increase in the reported coronavirus cases in the county. In its latest report for Wednesday, the Sudanese Health Ministry reported more than 356 confirmed cases and 17 fatalities, one of the highest daily tallies in months.

Overall, Sudan has reported more than 22,620 confirmed cases, including 1,425 deaths. The actual COVID-19 tally is believed to be higher given the country’s limited testing capabilities.