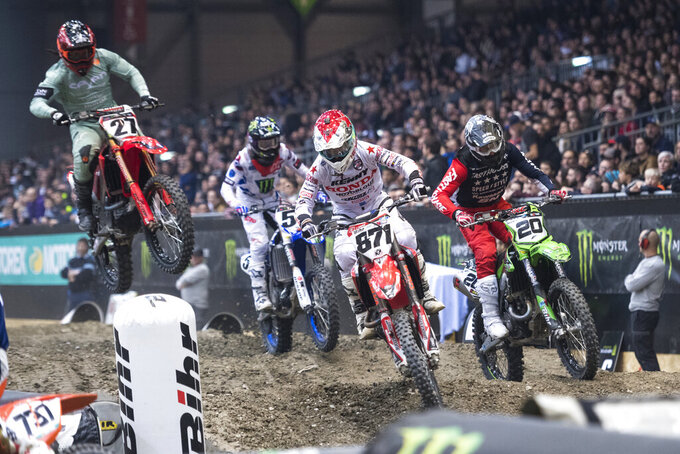 FILE - In this Nov. 30, 2018, file photo, competitors start the 33th Geneva International Supercross races at the Palexpo in Geneva, Switzerland. Supercross joined the rest of the sports world in shutting down during the coronavirus pandemic. Following the lead of NASCAR and UFC, the roughest sport on wheels returns this weekend. (Adrien Perritaz/Keystone via AP, File)

The gate dropped at a Supercross race for the first time in two months last weekend, kicking off a stretch of seven races to close out the pandemic-delayed season.

The race Sunday in Salt Lake City was unlike any other in the sport's history.

No pre-race pyrotechnics. No fans in the stands. Almost soundless once the engines were turned off.

“It felt like a day at the practice track,” German rider Ken Roczen said after finishing third at the University of Utah's Rice-Eccles Stadium.

Points leader Eli Tomac won Supercross' return, rallying from fifth to win his sixth race of the season. The rider from Cortez, Colorado, finished ahead of Cooper Webb in second and extended his season lead to eight points over Roczen.

The riders won't have to wait long to race again.

Back in March, Supercross joined sports leagues and racing circuits around the world in putting its season on hold after 10 races due to the coronavirus pandemic.

Series officials originally planned on resuming in the fall, but the timeline got pushed up when baseball started plotting its return and sports like NASCAR and UFC had successful fanless restarts.

The plan was to hold the season's final seven races over a span of three weeks.

The restart went off so well the motocross season, originally scheduled to start on May 16, will now kick off a 10- or 11-race season July 18 in Crawfordsville, Indiana. The length of the outdoor season will depend on state guidelines for large gatherings during the pandemic.

“Really excited how well things went,” said David Prater, director of operations for Supercross at Feld Motor Sports. “We were going into uncharted territory, so until you get one under your belt, you really don't know what to expect. It was great. I can't really find any fault in anything that went down on Sunday.”

Supercross officials put precautions in place to keep everyone at the track safe, some from their own ideas, others from consulting with other sports.

Everyone at the track had to fill out health questionnaires, wear masks and work in small functional groups. Pre-race COVID-19 testing — a requisite for entering the stadium — went smoothly, even with 705 riders, team members and race officials on site.

No one in the group tested positive for the virus and the flow into the track went smoothly, allowing for a free-flowing race day.

“We kept preaching to everyone, try to get in at various times, try to come as soon as you get the process done and all your documents signed, that way we won't have a backup at the gates,” Prater said. “Honestly, I don't think we ever had more than two, three, four people in line. We really didn't have a backup and I was a little surprised by that.”

The series resumes Wednesday night and will run through June 21, with all the teams and officials remaining in Utah until the seven-race run is completed.

Supercross officials aren't planning any changes for Wednesday's race, but they will keep an eye on how things go the rest of the way, ready to make tweaks if necessary.

“The important thing going forward is staying the course and not get complacent, staying disciplined," Prater said. “We've got six more to go and we've got to continue to drive home the point and continue with our safety protocol, not let up.”

By keeping up with safety standards, Supercross will allow the riders to do what they do best — not let up.