Takeaways from the final night of the Democratic convention 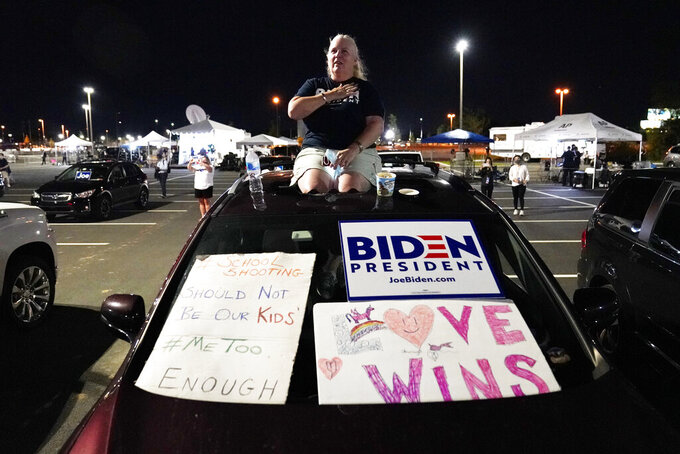 Tracy Holden of Wilmington, Del., during the Pledge of Allegiance, outside the venue where Democratic presidential candidate former Vice President Joe Biden will speak later tonight, during the final day of the Democratic National Convention, Thursday, Aug. 20, 2020, at the Chase Center in Wilmington, Del. (AP Photo/Carolyn Kaster)

A convention without a roaring crowd, confetti cannons, funny hats — a gathering in name only — delivered the Democratic presidential nomination to Joe Biden on Thursday, the culmination of a lifelong pursuit that comes at a time of crisis.

Here are key takeaways from the final night of the Democratic National Convention.

Biden needed an eloquent, emotional, clear speech accepting the Democratic nomination to dispel the criticisms lobbed at him almost daily by President Donald Trump, and even to allay the concerns of some of his supporters about whether, at 77, he was up to the job.

He delivered. His performance in many ways sounded more like the Joe Biden of his early Senate career, when he was considered one of the finest orators in his party, than the Biden in winter who at times has been halting in speeches and debates.

He offered contrasts of character, and policy, with Trump, pledging to unify a country that has grown more polarized during Trump's time in office.

It was clear Biden wanted voters to end the night seeing optimism and possibility, even as he continued his dire warnings about Trump, whose name he did not speak.

“If you entrust me with the presidency, I will draw on the best of us, not the worst,” Biden countered. “I’ll be an ally of the light, not the darkness.”

It’s a delicate balance, because Biden has spent his campaign sounding the alarm about Trump. But his purpose Thursday was to reframe his experience in government and his personal family suffering into a would-be president that Americans can find as an appealing alternative, not just a necessary one.

On the pandemic and a wounded economy: “The president still does not have a plan. Well, I do.”

On the pain of those who have lost loved ones to COVID-19: “I know what it’s like.”

It wasn’t new for Biden to say he wants a country “united in our pursuit of a more perfect union.” But it was a key moment for him to project that message to a new audience.

“Easily the best and most affecting speech Biden has ever delivered,” historian Michael Beschloss said on Twitter. FAITH AT THE FOREFRONT

Biden and the Democrats also put faith at the forefront, making a point not to cede the issue to Republicans.

Sen. Chris Coons, who represents nominee Biden’s home state of Delaware, spoke of a “private” faith that is personally defining for Biden, a practicing Roman Catholic. Coons said the nominee “believes in the power of prayer” and in “the dignity of all people” because they are “made in the image of God.”

A video from a CNN town hall in February showed Biden explaining his faith as he discussed the 2015 killings of nine Black men and women by a white supremacist at a historically Black church in Charleston. “They forgave him,” Biden said of the victims’ families. “The ultimate act of Christian charity. They forgave him.”

Trump maintains an overwhelming advantage among white evangelicals. But marginal shifts to Biden among that group and mainline Protestants and Catholics could be key in battleground states.

Indeed, the Democrats' virtual convention made clear they are still the Obama-Biden party. What that actually means, in terms of policy and politics, is, however, less clear.

Through four nights and eight hours of programming, the speakers who claimed the most airtime besides Biden and his vice presidential nominee Kamala Harris: former President Barack Obama and his wife, Michelle. And’s it really not close.

Obama was the only former president to speak live, and he spoke nearly four times longer than former President Bill Clinton -- a man not known for brevity. Michelle Obama closed out Monday night with a keynote almost twice as long as the combined time awarded to 2016 presidential nominee Hillary Clinton and House Speaker Nancy Pelosi, the first women ever to reach those pinnacles.

It’s a sobering reminder for the Democratic old guard that, even with a 77-year-old white man as nominee, the future of the party looks more like the first Black president, his wife and Biden’s running mate.

Democrats quite consciously played up empathy, compassion and a bit of righteous anger, all traits they associated with Biden.

On Thursday, it was Brayden Harrington, a 13-year-old who shared his story of bonding with Biden over their shared stutter. In a powerful moment, he made it, sometimes stuttering, through his own speech, which he'd marked up to show the cadences, just the way he said Biden had taught him when they met.

The night before, there was the Sanchez family of North Carolina telling of how Trump’s immigration policies threaten them.

On Tuesday, Biden’s name was placed in nomination by a New York elevator operator. On Monday, Kristin Urquiza offered one of the week’s most memorable lines, as she recounted losing her father to coronavirus: “His only preexisting condition was trusting Donald Trump — and for that he paid with his life.”

Some Republicans might call it exploitative. Some independents might see it as the obvious, even stale play for the major party that unabashedly advocates for more government action in the economy and society.

But Democrats saw added punch to the approach in 2020 because of the matchup at the top of the ticket. Trump’s calling card is the say-anything, etiquette-be-damned approach that infuses his rhetoric and, Democrats argue, his policies.

In short, Democrats are betting that a majority of voters simply want what former Republican President George H.W. Bush once called for: “a kinder, gentler nation.”

Mike Bloomberg provided a jolt to the 2016 Democratic Convention, when the billionaire former Republican mayor of New York unloaded on Trump and tried to show opposition to the reality show star came from all sides of the political spectrum.

But on Thursday he speaking after spending $1 billion on an ill-fated bid for the Democratic party’s nomination, after he which he was sued by former staffers for cutting their health insurance during a pandemic. There’s a deep current of unease among party operatives about him now.

The actor Julia Louis-Dreyfus added some comedic bite to a fairly somber convention that focused on the deaths of 170,000 Americans in a pandemic and the economic dislocation it has wrought.

Louis-Dreyfus, who played a vice president and a president on HBO's “Veep,” blended some of those poignant moments, sometimes awkwardly, with humor at Trump's expense.

After a clip of Biden discussing the massacre of 12 Black worshipers at a Charleston church by a white supremacist, and tying it to how the church helped him through his own tragedies, the camera cut quickly back to Dreyfus. “Just remember,” she said, “Joe Biden goes to church so regularly that he doesn’t even need tear gas and a bunch of federalized troops to help him get there.”

Before introducing a 95-year-old World War II veteran to speak about the contrast between Trump and Biden, Louis-Dreyfus imagined what Trump would tweet about her the next day.

She kicked off the evening saying, “These last few nights have been going so well, we’ve decided to add a fifth night and just play Michelle Obama’s speech on a loop.”