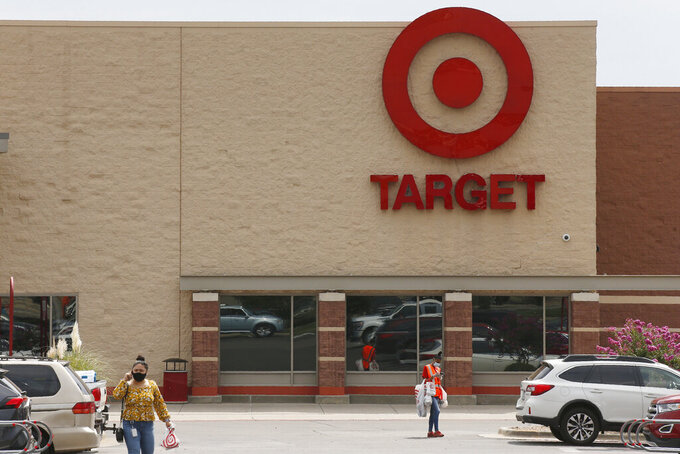 FILE - In this Tuesday, Aug. 4, 2020 file photo, people walk through the parking lot at a Target store in Oklahoma City. Target has reported that its sales as measured by a key metric registered their strongest performance to date for the company’s fiscal second quarter. It's the latest evidence that big-box stores are becoming consumers' prime shopping destinations during the pandemic. (AP Photo/Sue Ogrocki, File)

NEW YORK (AP) — Target reported the largest quarterly sales growth, including an online sales spike, in its 58-year-history, the latest evidence that Americans are consolidating their trips to big box stores and pivoting their spending to around the home during the pandemic.

Target said that online sales nearly tripled during the quarter as shoppers relied more on services like curbside pick up amid concerns about infections. But Target's same-store sales also spiked 10.9% during the three-month period ended Aug 1. Meanwhile, home improvement retailer Lowe’s Cos. reported on Wednesday that comparable store sales in the U.S. surged 35.1% and online orders more than doubled.

Walmart, Home Depot and now Target and Lowe's have reported surging sales for the latest fiscal second quarter that well exceeded analysts' expectations as Americans limit their supply runs to fewer stores and do more cooking and do-it-yourself projects at home.

Store executives say the federal stimulus checks and the extra unemployment benefits helped boost spending during the period. But even as business tapered off when they expired, retailers continue to see strong sales growth and acknowledge that a major shift in spending is at play.

“There's a true shift in share of wallet from vacations, from dining out, from apparel purchases to the home,” Lowe's CEO Marvin Ellison told The Associated Press on Wednesday.

The shift in behavior is reshaping the retail landscape at the expense of mall-based retailers and other stores forced to temporarily close this spring. Many were struggling before the pandemic because of what Americans buy and where they buy it.

But the pandemic has put those retailers further in peril because they were forced to close while discounters like Target and other stores that sold essential items were allowed to stay open.

About two dozen retailers including J.C. Penney, Neiman Marcus and J.Crew have filed for bankruptcy protection since the pandemic. So far this year, more than 40 stores have filed for bankruptcy, surpassing all of 2019. Another wave is expected in the fall, which could create bigger challenges to retailers who were healthy before COVID-19 pandemic.

For the fiscal second quarter, mall-based retailers are expected to lose $2.05 billion compared to a year ago, according to a Retail Metrics tally of roughly 100 retailers. But for retailers located off the mall, the group will see a 1.1% decline to $18.9 billion.

In fact, even the owner of T.J. Maxx, Marshalls and HomeGoods, reported a worse-than-expected loss and said its revenue fell 32%. TJX Cos., which has reopened its more than 4,500 stores, said there was strong demand for furniture and home decor at HomeGoods and the home section of its other discount stores. Its stores were open a little more than two thirds of the second quarter.

“We are confident that when more customers are comfortable with in-store shopping, we will be in a great position to continue gaining market share as we have for many years,”said Ernie Hermann, CEO for the Framingham, Massachusetts-based chain.

Department store chain Kohl's Inc., which had to temporarily close its stores this past spring and is mostly located off the mall, reported a 23% drop in sales for the fiscal second quarter.

Americans came to rely on big box retailers for supplies early when the economy was under lock down. The surge in new infections is keeping Americans closer to home in many places, and they're increasingly relying on same-day delivery and curbside pickup. Big box retailers had pushed aggressively into those areas before the pandemic, attempting to keep pace with Amazon.com.

Target, based in Minneapolis, said that it added 10 million new online customers during the first half of the year and gained $5 billion in market share. Clothing sales, which tumbled 20% in the first three months of the year as people focused on necessities, saw double-digit growth in the second quarter. That's a big warning sign to mall-based clothing stores.

Removing one-time costs and benefits, Target earned $3.38 a share, blowing past the $1.63 projected by Wall Street, according to a survey by FactSet.

Still, Target's CEO Brian Cornell says he's bracing for a continued volatile environment that makes it hard to plan way ahead. Like most retailers, Target abandoned its financial forecast when the pandemic started because of all of the uncertainty.

“It's a very challenging environment for us to provide guidance," Cornell told analysts on the earnings call. “We’ve got the pandemic in front of us. We’ve got uncertainty about back-to-school, back-to-college, the state of the economy. We do have a election coming up in November. Lots of different dynamics that we have to try to sort through."