Teacher raises back on table as SC senators discuss budget 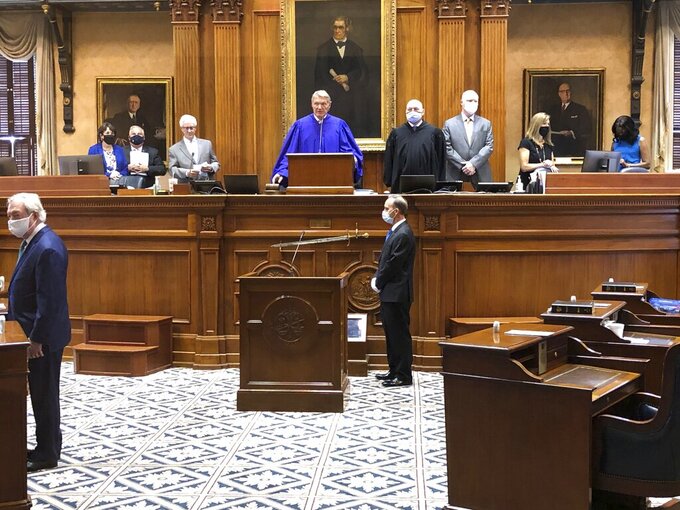 South Carolina senators and staff prepare for a one-day special session to discuss changes to November voting because of the COVID-19 pandemic on Wednesday, Sept. 2, 2020, in Columbia, S.C. Republicans rejected a proposal by Democrats to allow voters to use special drop boxes to leave absentee ballots. (AP Photo / Jeffrey Collins)

COLUMBIA, S.C. (AP) — South Carolina senators will likely consider whether to restore the annual raises most teachers get each year to the state budget when they return to Columbia next week for a special session amid the COVID-19 pandemic.

The Senate Finance Committee is working on a proposal to spend $40 million out of about $775 million saved up over the past two years on what are called step increases — pay raises of usually about several hundred dollars a year given to teachers as they gain experience.

Lawmakers suspended the raises in the spring because of the uncertainty of what the COVID-19 pandemic might do to the economy.

Senators also will likely consider setting aside $15 million in federal COVID-19 relief money for hazard pay bonuses for state workers who make under $50,000 a year and whose jobs are more risky during the pandemic. The committee plans to discuss details on those bonuses later this week.

Much economic uncertainty still remains, and Senate budget writers discussed Tuesday setting aside $500 million of the $775 million South Carolina has in the bank as a hedge in case predictions by economists that the state should bring in about as much money in taxes and fees this fiscal year as it did last fiscal year turn out to be too rosy.

“I cannot reconcile in my mind that we are out of this thing yet,” said Senate Finance Committee Chairman Hugh Leatherman.

The 89-year-old Florence Republican ran the meeting online from his home, demanding they wear ties and coats like they would if meeting in person. Leatherman told his colleagues he would not be on the Senate floor Sept. 15 when a two-week super-sized special session to deal with the budget and other matters begins to protect his health.

The Senate and the House agreed in May to pass a resolution allowing the state to continue to spend at current levels when the 2019-2020 budget year ended June 30 to give them more time to see what COVID-19 did to the economy. The House did pass a budge t in March expecting the state's boom times to continue, but the pandemic started.

In recent weeks, House leaders and the governor have suggested maintaining those spending levels at around $9 billion until a new General Assembly begins its session in January, worried money they agree to spend might in a few months not be there if the economy worsens.

But Sen. Vincent Sheheen said that if lawmakers keep delaying action, they may never do anything.

“We have an obligation to pass the budget as legislators in the state of South Carolina. If we don’t pass a budget right now, we won’t pass one,” the Democrat from Camden said.

Senators also have a few other ideas for the extra state money, including $4 million for additional school nurses, nearly $4.2 million that would provide an extra $135 for poll workers this November and $40 million to promote tourism, which they said could be especially important next spring if the pandemic is under control.

Conservative senators plan to look over the spending carefully, worried about possible mid-budget year cuts that can devastate state agencies.

“The conservative heart in me wants to save every nickel we can," said Sen. Tom Corbin, a Republican from Greenville County.

Senators also plan to discuss how to spend $668 million in federal relief money that has not been set aside. Leatherman and other leaders want $425 million of it to go toward repaying unemployment benefits paid since the economy crashed. Lawmakers have already sent $500 million in federal money to that fund.