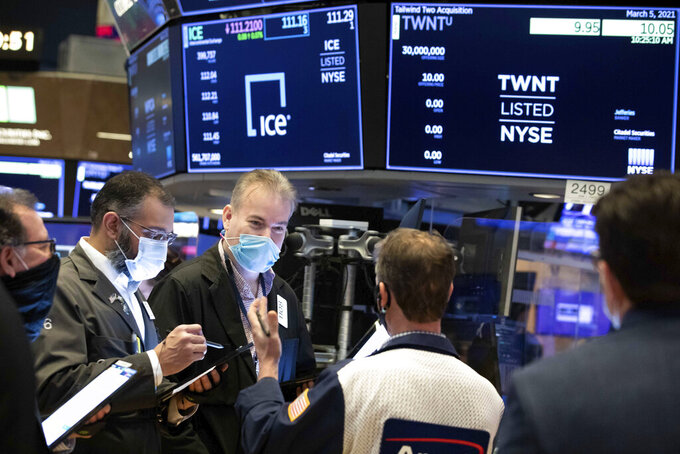 In this photo provided by the New York Stock Exchange, traders work on the floor, Friday, March 5, 2021, in New York. Stocks are swerving through another rocky ride Friday, as investors struggle to figure out what an encouraging report on the economy and the recent march higher for bond yields should mean for the market. (Nicole Pereira/New York Stock Exchange via AP)

Wall Street capped a volatile day of trading Friday with a broad rally that snapped the market's three-day losing streak.

The S&P 500 gained 2% after clawing back from a 1% skid that followed a 1% surge at the start of trading. Other stock indexes went through similar zigzags, but finished with solid gains.

The late-afternoon turnaround made up for some of the losses that the market began racking up after kicking off the week with the S&P 500's biggest gain since June. The index, which briefly slipped into the red for the year on Thursday, managed to end the week 0.8% higher, its first weekly gain in three weeks.

The market's latest gyrations came as investors struggled to figure out what an encouraging report on the economy and the recent march higher for bond yields should mean for the market.

“Ultimately, investors will conclude that they’ll be happy to take the bad with the good,” said Sam Stovall, chief investment strategist at CFRA. "The bad thing being higher interest rates and the good being an improvement in the economy.”

The spark for all the uncertainty Friday was a government report that showed employers added hundreds of thousands more jobs last month than economists expected. That’s an encouraging sign for the economy, and it helped lift Treasury yields, with the closely watched 10-year yield momentarily topping 1.60%.

The yield later fell back from that midday spike and wound up at 1.56%, only slightly higher than a day earlier. It remains well above its roughly 0.90% level at the end of last year.

While the jobs report was encouraging in terms of jobs added by the economy, wage growth — an inflation bellwether — rose last month in line with expectations. That may have helped ease some bond investors inflation worries, at least for now.

“That sort implied, ’OK, at least this report doesn’t point to a surge in inflation,” Stovall said.

That view could change next week, when the government issues its latest consumer and wholesale price data.

For about a year, the stock market kept climbing on expectations that an economic recovery was on the way, even when the coronavirus pandemic meant conditions at the time seemed very bleak. Now that the recovery is much closer on the horizon, the market is unsettled because one of the main underpinnings for that incredible run is under threat: ultralow interest rates.

Yields have been marching higher with rising expectations for the economy’s growth and for the inflation that could accompany it. Economists have been upgrading their forecasts for this year as more people get COVID-19 vaccines, businesses reopen and Congress gets closer to pumping another $1.9 trillion of financial aid into the economy.

The worry is that inflation could take off, or something else could happen to jack yields up even further.

It’s the speed at which Treasury yields have climbed that has gotten Wall Street so uncomfortable, more than the actual level, which is still low relative to history.

Higher yields put downward pressure on stocks generally, in part because they can steer away dollars that had been headed for the stock market and into bonds instead. That makes investors less willing to pay as high prices for stocks.

The pressure is most intense on stocks that look the most expensive, relative to their profits, as well as those bid up on expectations of fast growth far into the future. Critics say most stocks across the market look expensive after prices climbed much, much faster than profits, and warnings about a possible bubble have been on the rise.

Tech stocks and other high-growth companies in particular have been at the center of the downdraft. They soared more than the rest of the market for much of the pandemic, and in the years preceding it. On Friday, Tesla was the heaviest weight dragging on the S&P 500. The stock fell 3.8% and is now down 15.3% so far this year.

It’s another reminder of how dominant Big Tech stocks have become in the market. If inflation does ultimately remain under control, as the Federal Reserve’s chair and many economists expect, the general expectation along Wall Street is that most stocks could benefit.

A stronger economy would mean bigger profits for companies, which would allow their prices to hold steady or rise, even if rates are climbing.

By Friday afternoon, the vast majority of stocks in the S&P 500 had rebounded. Energy producers made some of the largest gains. Diamondback Energy jumped 4.9%, and Chevron gained 4.3% after the price of U.S. crude oil rallied 3.5%.

Tech stocks would likely also see some improvement in their profits, just not to the same degree as companies whose businesses are closely tied to the strength of the economy, such as banks or travel companies.

But Big Tech stocks have grown so big that their movements can mask what's going on in the broad market. Five Big Tech stocks alone make up more than 21% of the S&P 500 by market value, so weakness for tech can hold back S&P 500 index funds even if many stocks within it are rising.

All the big movements in the bond market have increased attention on the Federal Reserve, whose chair said this week that he’s noticed the recent climb in yields. He disappointed some investors when he didn’t offer anything more forceful that could cap the rise. That has anticipation building for the Fed’s next policy meeting, a two-day session that ends March 17, and whether Powell will offer any more guidance on what moves the Fed may make next.